Premier League footballer Benjamin Mendy was reportedly shocked to discover that he would not be returning to his mansion or housed on a VIP wing in jail following his rape charges.

Manchester City defender Mendy is said to have been told that he would be taken to the VP wing of a tough prison in Liverpool – denoting ‘vulnerable prisoners’ who need to be isolated from the main prison population, such as sex offenders – after appearing in court on four counts of rape and one of sexual assault on Friday.

The 27-year-old did not realize that he had been denied bail to return to his $6.9 million home and misunderstood officers as saying that he would be kept in a VIP wing, according to The Sun.

“When Mendy arrived, staff explained he was going to be kept on the VP wing for his own safety,” the outlet has quoted a source as saying.

According to The Sun Manchester City star Benjamin Mendy had a meltdown when told he was not going to a VIP wing of Liverpool’s Altcourse prison but to an ordinary cell. He faces 4 rape charges and if convicted will be spending a long time in an “ordinary” cell. My heart bleeds.

“But perhaps because he is French and his English isn’t great, he misunderstood what they had said and thought he was being taken to a VIP wing for celebrities. He wasn’t happy and it was a very sobering experience for him.”

Mendy will be locked up at the 1,324-capacity jail until the former France international appears before judges again at nearby Chester Crown Court on September 10.

The World Cup winner allegedly attacked three women, including one under the age of 18, at his home in the village of Prestbury.

His location, HMP Altcourse, is a men’s prison opened in 1997 as the first privately-financed jail in the UK.

Also housing young offenders, it is set in the Fazakerley area of Merseyside and takes offenders from a wide local area.

The facility is a stark contrast to Prestbury, which is listed on a real estate website as boasting an average property price approaching $2 million.

The village was dubbed ‘footballers’ alley’ by one UK newspaper in 2009, with Manchester United legend Wayne Rooney and former City striker Carlos Tevez said to have owned plush homes locally at the time.

Mendy, who joined City from Monaco for around $71.5 million in 2017, will reportedly strenously deny the charges leveled against him. 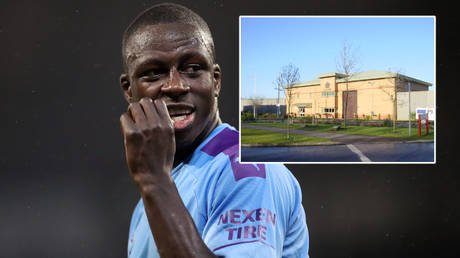