‘Madness’: Fans baffled as England football stars don’t have to isolate despite Irish Covid carrier playing full game against them

‘Madness’: Fans baffled as England football stars don’t have to isolate despite Irish Covid carrier playing full game against them

Fans have questioned why international matches are still going ahead after Alan Browne, an Ireland player who tested positive for Covid-19, was said to have been no risk despite playing 90 minutes against England with the virus.

Supporters joked that Ireland’s performance in their 3-0 defeat at Wembley, which Browne played in throughout, had been so inept that none of the visiting players would have risked coming close to their England counterparts.

The midfielder was on the pitch at the same time as 32 players, including the likes of Manchester United captain Harry Kane and Premier League top scorer Dominic Calvert-Lewin, but is the only player from either squad who will be required to isolate despite widespread lockdowns and government advice not to come into contact with groups of people.

“Harsh criticism of Alan, here,” mocked one reader upon learning that the unsuspecting Browne had not been deemed to have potentially passed the highly infectious virus on.

There are no close contacts of the player and the rest of the staff & squad tested negative ahead of Sunday’s UEFA Nations League against Wales in Cardiff#COYBIG pic.twitter.com/Llpde9apHo

Ireland says there were no close contacts with Alan Browne.
So no Ireland or England players have to isolate as a result of playing on the same pitch as him at Wembley before his positive test was known https://t.co/syOgmREpGw

Harsh criticism of Alan here, I know they were poor, but saying he didn’t get near an England player all night is quite scathing.

“I know they were poor but saying he didn’t get near an England player all night is quite scathing.”

While international travel has been largely put on hold among the general public, the wisdom of sending footballers thousands of miles around the world to play international friendlies this week has caused widespread confusion.

The packed program will proceed across the weekend, with the relatively new Nations League continuing across Europe and the likes of Lionel Messi taking part in World Cup Qualifiers in South America.

“Assume they might have to call two matches off if they investigated this too hard,” one baffled fan said of the announcement.

Assume they might have to call off 2 matches if they investigated this too hard!

Didn’t he play the full game? So his performance was so bad, he didn’t get near any other players!

“Heaven forbid we lose the Nations League,” another sarcastically replied, speaking at a time when many have claimed that sporting exceptions are being made for commercial reasons rather than the necessity of holding competitions.

New rules drawn up during the pandemic say that players who share a pitch are not considered to have been in “close contact”.

They would need to have been in face-to-face contact within two meters of each for at least 15 minutes to warrant going in to self-isolation for 14 days.

The Football Association of Ireland issued a statement saying that none of Browne’s fellow squad members would be required to isolate, causing some supporters to question how the Preston player had managed to stay separate from his teammates for prolonged periods despite sharing accommodation, transport and a locker room with them.

Apart from those who were in the dressing room, hotel and team coach with him?

“[What about] those who were in the dressing room, hotel and on the team coach with him?” asked one question.

“If you’re sat in the same pub as someone who tests positive, you have to isolate – madness,” pointed out another response.

The association said on Friday morning that no other Ireland player had tested positive.

Striker Callum Robinson left the camp before the England match after a positive test and will miss Ireland’s matches in Wales on Monday and at home to Bulgaria on Wednesday.

If you’re sat in the same pub as someone you tests positive you have to isolate however.. madness

No wonder there seems to be a different player catching it every week if this is the logic used.

I might join the anti-maskers after this, finding out playing football with someone who has covid is OK is making me think that maybe this thing isn’t as easy to catch as they’re letting on.

Forwards Adam Idah and Aaron Connolly were forced out of Ireland’s crucial Euro 2020 play-off semi-final defeat against Slovakia in farcical circumstances last month, withdrawing as a precaution shortly before kick-off because they had both inadvertently sat in plane seats near a member of staff who tested positive.

Browne, who missed one of Ireland’s penalties as their hopes of reaching the finals tournament ended, described the disruption as “not ideal”.

“We’re aware, going into these trips, that you can get pulled aside to be told that you can’t be involved,” he told reporters.

“Every team’s in the same boat. It can happen to anyone.” 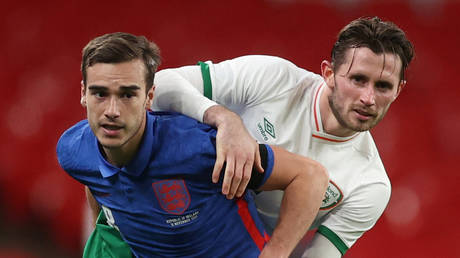 ‘The carnage has started’: US faci...