Daniil Medvedev suffered a mid-match meltdown as the Russian was sent crashing out of the French Open in the first round by Hungary’s Marton Fucsovics.

The clay courts of Roland-Garros have never been a happy hunting ground for Medvedev, who had yet to win a match on his three visits to Paris prior to this year.

That record made Medvedev’s ranking as fourth seed look optimistic this time around, and so it proved as the Russian fell at the first hurdle against Hungarian outsider Fucsovics in a tempestuous late-night match on a chilly Court Suzanne Lenglen.

Fucsovics took the first set 6-4 before Medvedev imploded during the tie-break in the second set, slamming his racket onto the clay after losing a remarkable rally to go 3-6 down.

The Russian was given a penalty point – having earlier been warned for an audible obscenity – and handed the set to Fucsovics before storming off to his chair.

Racquet smash and warning which leads to point loss and the set too. #RG20 pic.twitter.com/QmkH9vnSII

The 24-year-old Medvedev managed to recapture some composure to take the third set 6-2, but any hopes of an unlikely comeback were short-lived as the Hungarian won the third set 6-1 to complete the win.

After his latest outbursts, questions will again be asked over Medvedev’s temperament.

The big Russian was infamously involved in a running battle with the crowd on his way to the US Open final in 2019, and while the stands were sparsely populated in Paris he was again unable to stop his anger from spilling over.

There were several flashpoints with Fucsovics, with Medvedev heard muttering his frustrations in Russian and French during the match and at one point resorting to serving underarm.

Fuscovics angry that Medvedev hit the ball at him. #RG20 pic.twitter.com/tVFxlLfVav

Medvedev, after being broken one more time:
“What should I do? Tell me. I REALLY want to know. How to win a match? After the match you tell me what I should have done but I want to know what I should do now to win the match. By the way, I’m talking calmly”

The racket-smash in particular caught the attention of social media users, some of whom took to nicknaming the Russian ‘MAD-vedev’ in a pun on his short fuse.

Considering his clay court struggles, Medvedev may not be overly surprised or disappointed at his early exit in France, as his attentions turn to what can be salvaged from the remainder of the season.

Fucsovics, who earned his first win over Medvedev at the fourth attempt, now meets Spain’s Albert Ramos Vinolas in the second round. 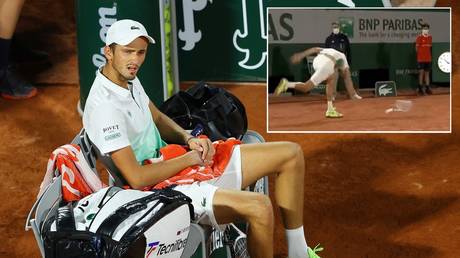