The worst-kept secret in MMA became a reality today after it was confirmed that Conor McGregor and Dustin Poirier will rematch on January 23 on ‘UFC Fight Island’, but will it be a repeat for the Irishman or revenge for Poirier?

The fight, which will headline the card at UFC 257, comes after months of social media wrangling between the two lightweight standouts.

Former champion McGregor has long been plotting a return to 155-pound supremacy, more than two years after he was defeated in a world title fight by Khabib Nurmagomedov.

The Irish superstar evidently sees Poirier as the ideal stepping stone to a world title shot in a division that remains wide open amid continued speculation about the future of the undefeated Russian.

McGregor initially proposed a December “charity exhibition match” with Poirier to take place in December in his native Dublin, with proceeds to be split between Poirier’s “Good Fight Foundation” and several charities in which the Irishman is involved.

UFC boss Dana White, predictably, wasn’t keen on this particular idea and moved forward with plans for the two to renew their rivalry in the octagon. And, despite some apparent hitches in agreeing a deal, the fight was “officially” announced via McGregor’s media outlet, The Mac Life.

“Conor McGregor has signed his bout agreement for his rematch with Dustin Poirier for January 23,” said the message accompanying the post.

“The news finally makes the contest official, with all parties having agreed to terms, and the two men are set to meet at 155-pounds.”

Speaking to The Mac Life, McGregor said, “I am very grateful to be about to return and get to do what I love again.

“I look forward to the fresh test Dustin will bring since our first bout, while also showcasing my own incredibly deep cache of weaponry. Whatever tool is needed on the night will be pulled from the duffel.

“I am also really excited about aiding Dustin’s charity ‘The Good Fight Foundation’, which through the donation, will build a gym/premise for disadvantaged youth in his childhood hometown. I truly love this, and pledge to match the donation on a premise in my own childhood hometown! Both spots with an ode to the upcoming bout.”

The fight will be a lightweight rematch of their featherweight bout at UFC 178 from back in September 2014. On that occasion, McGregor made good on his pre-fight prediction of a first-round finish, winning the fight by TKO early in the first frame.

This time, both men come into the fight with differing momentum. Both men have since won and lost UFC title fights, and both have been soundly beaten by the division’s true standout, Khabib.

And, despite announcing his retirement from mixed martial arts after his win against Justin Gaethje last month, Khabib still looms large over this particular matchup.

Dana White has iterated that the McGregor-Poirier fight won’t be for the (potentially vacant) world title still held by Khabib, and that Nurmagomedov may still be tempted to return for one final fight to reach the holy grail 30-0 record – a stated objective of Khabib and his late father, Abdulmanap.

A win for either man will obviously move the victor a giant step closer to a world title opportunity, but the impact of defeat might just be incalculable.

If McGregor gets his hand raised in Abu Dhabi early next year it will show that his famed violent power remains intact despite his recent inactivity, and if Poirier wins it will highlight the improvements he has made in the six years since his first loss to McGregor.

A McGregor loss, though, would be a seismic blow to his future as a championship-level fighter, and could suggest that it is Poirier, and not McGregor, who has upped their game to the necessary level to compete at the very highest level of the sport.

It will be either repeat or revenge when they meet again, and it will be fascinating to watch. 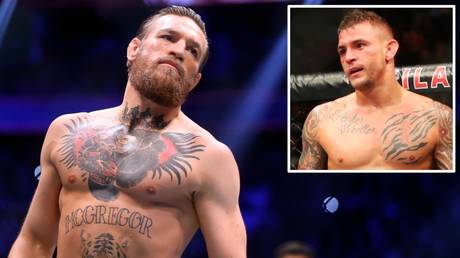