Barcelona striker Luis Suarez, who has been deemed surplus to requirements at the Nou Camp by new manager Ronald Koeman, has taken to Instagram to issue a cryptic rebuke of people he suggested had been speaking on his behalf.

Suarez, 33, has one year remaining on his current Barcelona contract but will almost certainly see his six-year stay at the club come to an end as part of Koeman’s summer clear-out, as the Dutchman seeks to rebuild the team after a trophyless 2019-20 season.

The Uruguyan was reportedly told by Koeman in a brief telephone call on Monday that he should start looking for other clubs – a decision which is widely seen as a factor in close friend and long-time strike partner Lionel Messi’s bombshell decision to quit the Catalans around 24 hours later.

Suarez has now fired back in a message directed at people who he suggested had been speaking about him without knowing the full picture.

“There are people using my name and saying things about me, people that I’ve had nothing to do with in years. I’ll speak for myself when the time comes,” wrote Suarez in his Instagram stories, adding the hashtag #notodoesverdad (#NotEverythingIsTrue).

Suarez – Barcelona’s third-highest scorer of all time – looks set to be followed out of the Nou Camp door by Messi, who is pushing to leave the club this summer after a disastrous season saw them lose out in the La Liga title race to Real Madrid before being dumped out of the Champions League in an 8-2 quarterfinal mauling by Bayern Munich.

Messi informed Barcelona of his intentions in a fax on Tuesday, insisting he can walk away for free due to a clause his contract which allows him to leave at the end of each season.

Barca officials, however, have said that the clause expired in June and that the prolonged season due to the Covid-19 pandemic has no bearing on the agreement.

The team most strongly linked to securing the 33-year-old Argentine’s signature are Manchester City, where Messi could be reunited with former Barcelona manager Pep Guardiola, under whom the team enjoyed spectacular success between 2008 and 2012.

Meanwhile, Suarez has been linked with former club Ajax as well as Juventus, or even a potential switch to MLS and Inter Miami as he plots his next destination. 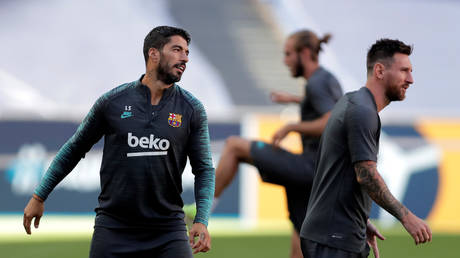