Close
Trending News
HomeSport‘Longer in the toilet than it took Bezos to go to space’: Murray unloads on ‘cheating’ Tsitsipas as ‘Toiletgate’ row rocks US Open

‘Longer in the toilet than it took Bezos to go to space’: Murray unloads on ‘cheating’ Tsitsipas as ‘Toiletgate’ row rocks US Open

‘Longer in the toilet than it took Bezos to go to space’: Murray unloads on ‘cheating’ Tsitsipas as ‘Toiletgate’ row rocks US Open

Murray performed admirably during the five-set tussle, eventually losing out to Tsitsipas in the five-set match which extended to almost five hours of court time – but the Briton has accused his opponent of stalling throughout their clash after leaving the court on several different occasions.

Before the deciding fifth set began, Tsitsipas left the match for a period of seven minutes prompting Murray to complain to the umpire and match supervisor about his opponent’s prolonged absence from the court.

The Brit was heard exclaiming that his rival was “cheating”, and when he did return, Tsitsipas won Murray’s first service game and took what proved to be an unassailable lead on his way 6-4 win in the crucial deciding set.

“It has never once taken me that long to go to the toilet, ever!” #andymurraypic.twitter.com/JiJJoUaipL

“The toilet’s right there. What’s he doing in there?” an angry Murray asked of supervisor Jerry Armstrong. “It’s never once taken me that long to go to the toilet, ever.“

Speaking after the match’s conclusion, Murray continued his angry diatribe: “It’s not so much leaving the court, it’s the amount of time. You can not stop the way that that affects you physically.

“It’s disappointing because I feel it influenced the outcome of the match. I’m not saying I win that match for sure, but it had influence on what was happening after those breaks.”

Murray had also questioned Tsitsipas’ decision to leave the court at the end of the second set, also for a toilet break, and prior to the beginning of the fourth he called a medical timeout to receive treatment for an injury to his foot.

Players in five-set matches are eligible to take two toilet breaks throughout the course of the match as well as one to change clothes.

And while Murray admitted that he is a fan of the 23-year-old Greek, he admitted afterwards that Tsitsipas’ antics on the court had caused him to lose respect for his opponent.

“I rate him a lot, he’s a brilliant player and he’s great for the game,” said Murray.

“But I have zero time for that stuff, at all, and I lost respect for him. If everyone else feels like that’s totally cool and there’s no issue with it then maybe I’m the one being unreasonable. But I think it’s nonsense and he knows it as well.

“That’s annoying for me because it sounds like sour grapes because you’ve lost a match. I would have said the same thing if I’d won, I promise.”

Not letting the issue lie, Murray also tweeted: “Fact of the day. It takes Stefanos Tsitipas [sic] twice as long to go the bathroom as it takes Jeff Bazos [sic] to fly into space. Interesting.”

Fact of the day. It takes Stefanos Tsitipas twice as long to go the bathroom as it takes Jeff Bazos to fly into space. Interesting. 🚽 🚀

This toiletgate discourse is never going to end

Tsitsipas, for his part, defended his actions and said that him leaving the court was within his rights and that nothing untoward was done.

“I think it’s clear that I took my clothes with me when I left the court,” he said after the match.

“That’s the amount of time it takes for me to change my clothes and to walk back to the court – [it] takes a little bit of time.” 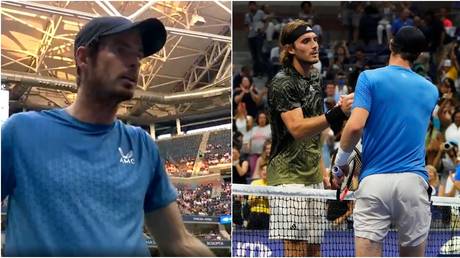 ‘You can smell the blood from...