Conor McGregor has filmed himself puffing on a cigarette while lounging topless on a beach, causing fans to speculate that the high-rolling star may have been pursuing his interest in marijuana in the early days of his retirement.

McGregor has been keen to highlight his luxurious, carefree lifestyle since announcing his retirement last month, and the heavily tattooed provocateur was inspired by Real Madrid captain Sergio Ramos as he relaxed topless on a sun lounger in the south of France.

Adding to his Instagram story for the benefit of his following of almost 37 million, McGregor grabbed a long rolled-up cigarette before a waitor rushed in behind him to offer a lighter.

Accompanied by a soundtrack of ‘Mo Money Mo Problems’, the rap classic by The Notorious B.I.G. about the trappings of fame and fortune, McGregor then took a puff, smiled into the camera and winked while asking the Madrid captain: “What you reckon?”

McGregor is smoking Marijuana frequently these days. Khabib stands no chance in the rematch. Kinda unfair to be honest pic.twitter.com/xM8PgsThko

Earlier in the evening, the Spain legend had been pictured impersonating McGregor’s instantly recognizable “Billi” Octagon strut on a pitch in his Madrid training kit.

While there was no direct suggestion that there was any marijuana in the cigarette, McGregor has shown an interest in weed in the past.

In the aftermath of his defeat to lightweight rival Khabib Nurmagomedov in October 2018, McGregor sampled some of boxing icon Mike Tyson’s homemade strain when they met in Ireland, admitting alongside a photo: “Some giggle off that Cherry pick Kush.”

He had been pictured visiting Amsterdam cannabis cafe Prix d’Ami earlier that year, chatting to an employee who was taking care of a huge box of marijuana.

He was drinking during his last camp with khabib and got smashed,now he drink in and smoking! Lmao! What a bum..

This was on his insta in the last week as well. I can assure you it’s not CBD lol. He visited my university a few years back and was smoking with Mike Tyson. Pretty well known in Ireland that McGregor is fond of the reefer pic.twitter.com/8m5pduKHyR

Nothing is gonna change in a rematch if it happens. pic.twitter.com/guYBkGk91A

An MMA fan who shared McGregor’s video on Twitter alluded to findings by The Athletic last month that almost half of MMA fighters use marijuana for recovery or recreational purposes.

“Khabib stands no chance in the rematch,” they said, assuming that McGregor will come out of retirement for a long-anticipated second scrap with Russian hero Nurmagomedov. “Kinda unfair to be honest.”

They then claimed: “He visited my university a few years back and was smoking with Mike Tyson. Pretty well known in Ireland that McGregor is fond of the reefer.”

A viewer who was less convinced of marijuana’s qualities warned: “He was drinking during his last camp [before fighting] Khabib and got smashed.

“Now he is drinking and smoking. What a bum.”

Others speculated that McGregor was showing off in the latest stunt aimed at emphasizing his inactivity ahead of a lucrative potential comeback in the future.

The Irishman celebrated his 32nd birthday earlier this week while holidaying with girlfriend Dee Devlin and young children Conor Jnr and Croia, revealing a £500,000 watch and driving a Lamborghini ‘rocket ship’ as part of a week bragging about his wealth.

“Is he really smoking, or is that for the camera? He lit it so unevenly but maybe it’s because he was recording,” asked one.

Another replied: “He made his cash off the Floyd [Mayweather] fight and is living. Everyone wants to diss him now because he chooses to do what he wants.

“[UFC president] Dana White nor any UFC fighter can’t say sh*t to him. He’s a multi-millionaire and still pulls in the most PPV orders.” 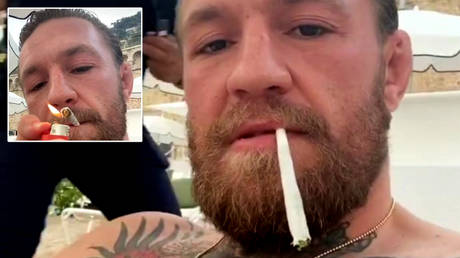