World champion swimmer Yulia Efimova has taken her followers on a whirlwind tour of the waterfalls, lakes and mountains of California’s Yosemite National Park, singing and dancing with a pair of Russian companions along the way.

Six-time world breaststroke champion Efimova perched on the edge of a cliff overlooking a mountain at the national park, where she filmed cascades of water tumbling towards acres of lush greenery at one of the world’s most famous beauty spots.

The 28-year-old had been preparing for the Olympics in the US before they were postponed as a result of the coronavirus pandemic, allowing her to turn her attentions to the wildlife on her doorstep during a summer in which she has taken a boat trip to swim in bioluminescent waters and been a frequent visitor to nature reserves.

Revealing that she had covered more than 21 miles of the mountains, Efimova admitted: “My legs are not adapted to walk so much.

“Swimming is easier but it was worth it. And again, thanks to quarantine for such an opportunity.”

She was joined by two of her companions who had joined her on her boat excursion and in her swimming pool at home earlier in the summer, as Alena Rumiantceva and Lisa Bazarova appeared to be playing music while dancing in one of the videos.

Rumiantceva is a former Russian Junior National Team champion and Bazarova is a student athlete at the University of Texas, so it was little wonder that the trio ended up relaxing in the water at Mirror Lake.

Russian record producer Irina Nelson summed up how many fans have probably felt about Efimova’s panoramic posts since lockdown restrictions began, writing: “In this photo, as always, everything is great.”

In June, Efimova also kept her Instagram following of more than 214,000 updated by picturing herself draped over rocks and admiring more waterfalls at the Grand Canyon and Yellowstone national parks. 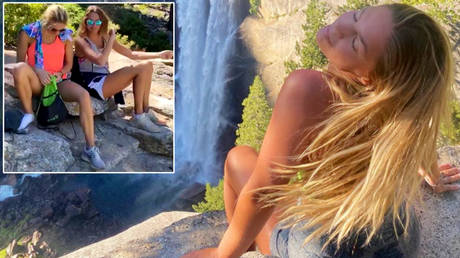