The Liverpool Football Club has clinched the Premier League championship after Manchester City lost out 2-1 to Chelsea, handing the Reds their nineteenth title following a 30-year drought.

Man City needed a win on Thursday for any hope of catching up to Liverpool on the table, but its defeat at Stamford Bridge guarantees the Reds will take the title come July, the club’s first since 1990.

Liverpool has achieved the earliest title win in Premier League history, coming out 23 points ahead after playing only 31 games and winning all but 3.

Liverpool’s victory comes amidst an odd season, interrupted by a three-month hiatus due to the coronavirus. Despite earlier suggestions the campaign might be called off altogether, the league came back to life this month and allowed the club its historic win.

Reds fans were seen in raucous celebration after Thursday’s match, setting off fireworks, waving banners and joining in chants.

The scenes in Liverpool 🙌 #LFC pic.twitter.com/FUaR0zL87u

The scenes outside Anfield as fans celebrate Liverpool winning the Premier League for the first time in 30 years! pic.twitter.com/13tnnOpSlL

Though Liverpool’s point lead guarantees it the title, the club still has seven matches to play in the season, set to face off with Man City next Thursday, followed by a home game against Aston Villa on Sunday. 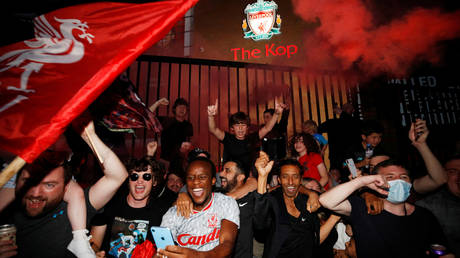