Manchester United legend Wayne Rooney has sounded the alarm to teams hoping to catch Liverpool next season, saying that the Reds agreeing terms with Thiago Alcantara could surpass even Lionel Messi’s mooted move to Man City.

Liverpool ended a 30-year top division drought when they secured the Premier League title in the recently compelted coronavirus-hit season but Rooney, the Red Devils’ all-time top goalscorer, has suggested the red side of the Mersey won’t have to wait long for their next title should they complete the rumored signing of Thiago from German champions Bayern Munich.

Jurgen Klopp has been strongly linked with a cut-price move for the Spanish midfielder whose contract in Munich is due to expire next year, and it is clear that Rooney is wary of the impact that Thiago might make on the English top flight.

“I think it is City or Liverpool [who will win the league],” Rooney said to TalkSport on Thursday. “Chelsea are making a lot of signings, some good signings.

“Man Utd have a lot of potential in the players they have got but I still think they are a year away. Chelsea with the new signings will possibly need a year to get everyone on the same song sheet.”

“So I do think it is between City and Liverpool. And if Liverpool get Thiago from Bayern Munich, I think it is done [the title]. That is a better signing than Messi going to Man City.”

Barcelona icon Messi recently stunned club officials by informing them that he wanted to leave the club in advance of the new season, potentially paving the way for what would be one of the most remarkable transfers in recent football history.

Manchester City have been reported as being at, or near, the top of the queue to negotiate a deal with Messi, bolstered perhaps by Messi’s prior associations with Pep Guardiola and the club’s sporting director, Txiki Begiristain.

Last weekend, Rooney used his column in The Sunday Times to praise Thiago – and the boyhood Evertonian also took time to warn the rest of the league what might happen should he link up with the likes of Mo Salah and Sadio Mane.

“He almost came to United in 2013 and now Liverpool are linked with him,” Rooney wrote. “He’s one of the best midfielders around – I just hope he doesn’t go there!

“He can take the ball, be composed on it, keep things ticking over – and he’ll put his foot in. He’s an all-round midfielder, really, with a bit of everything.” 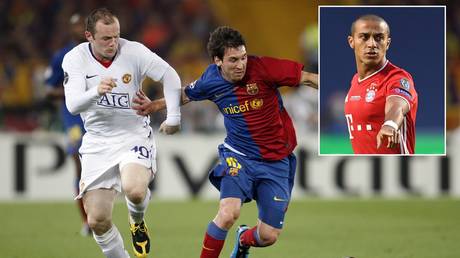