Liverpool fans were happily celebrating their first English league title win in 30 years on Thursday night, but one supporter took the festivities a little too far which landed him on the seat of his pants on the pavement.

After football was restarted in England, it was only a matter of time before The Reds, the runaway league leaders, won their maiden Premier League title, and the moment of truth was handed to them on Thursday night when Chelsea beat second-placed defending champions Manchester City 2-1 at Stamford Bridge.

Cristian Pulisic’s fantastic first-half breakaway goal to open the scoring and Willian’s second-half penalty canceled out Kevin De Bruyne’s sublime free kick equalizer as The Blues’ win gave Liverpool an unassailable 23-point lead at the top with 21 points left to play for in the remaining 7 games.

That triggered wild celebrations across Merseyside, throughout Liverpool and especially outside the club’s Anfield stadium. Jubilant crowds danced, drank and sang into the small hours with all the joy a first title win in three decades would be expected to bring.

Like with all major celebratory gatherings, there is always an element of competition to see who can party the hardest. But as the old saying goes, the harder they come the harder they fall, and one reveller found that out the, erm, hard way.

Donning a mankini, the fan can be seen scaling a set of ladders leant against a street lamp apparently attempting to plant a ‘Liverpool Champions’ flag. As he is serenaded with a rendition of Queen’s ‘We Are The Champions’ by onlookers, the cocky climber leans backwards in a pose not dissimilar to those made famous by Queen frontman Freddie Mercury.

Just as our mankini-sporting Mercury-imitating hero swings back, the top of the lamppost snaps off in his hand, sending him crashing to the pavement to screams from those watching, before the video cuts out. After the footage was posted there were concerns for the fan’s well-being expressed on social media.

Elsewhere, and the streets directly outside Liverpool’s Anfield stadium were left littered with garbage in the aftermath of celebrations of the side winning their 19th league title, which placed them one behind Manchester United overall.

Jurgen Klopp was recorded busting some immaculate dance moves with the rest of the title-winning team at their official party; the German coach is now the manager of the European and English champions, until a new Champions League winner is crowned in Portugal on August 23, despite being earlier knocked out of this season’s tournament.

Merseyside police released a statement confirming they had made 10 arrests for public order offences during the celebrations, despite urging fans to put public health first and not to ignore rules on social distancing measures relating to mass gatherings. 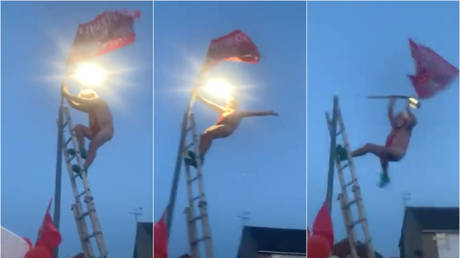