The prospect of signing Lionel Messi may have led a number of top football clubs to consult with their bank managers, but one club that won’t be entering the race for his signature is Liverpool, according to boss Jurgen Klopp.

Messi shocked the football world when he declared his intention to leave the Camp Nou in the summer, sparking mass speculation over where he might end up.

But he’s unlikely to be taking to the field in the famous red of Liverpool, with the runaway winners of the 2019/20 Premier League unable to overcommit their finances to seal his signing.

Liverpool boss Klopp admitted he would love to have Messi in his squad, but the sheer amount of money required to secure the Argentinian superstar’s signing makes it a non-starter.

“Interest? Yeah, who doesn’t want Messi in their team,” he admitted.

“The numbers are absolutely not for us. We don’t even start thinking about it. No chance! But… good player.”

According to a report from French newspaper L’Equipe, Messi earns a staggering $9.8million per month at Barcelona, eclipsing fellow superstars Cristiano Ronaldo ($5.4 million) and Neymar ($3.6 million) as the sport’s top earners.

Liverpool’s closest domestic rivals, Manchester City, are believed to be the leading contenders to sign Messi during the off-season.

The Sky Blues finished a colossal 18 points behind Liverpool in the Premier League last season, but are hopeful that the good relationship between manager Pep Guardiola and Messi will help secure the Barca star’s signature.

If they’re successful, Klopp says it could have a huge impact not only on the Premier League, but also on the title race in 2020/21.

“It would make it even more difficult to beat them, which was already very difficult,” he said.

“It would be interesting too, because Messi has never played in another league apart from Spain. I would like to see it, but I’m not sure if I will.”

Klopp may not be in the market for Messi, but said he and his scouts will “look constantly for improvement.”

“We will see how much we can and want to spend,” he said. 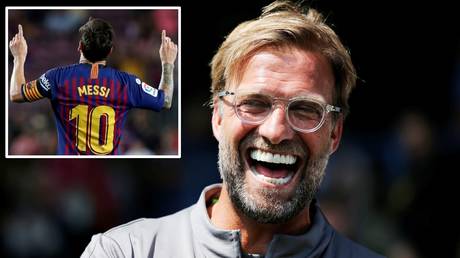