After a cull of backroom staff, the Barcelona hierarchy have turned their attention to convincing Lionel Messi that his future lies at the Camp Nou as the Argentina maestro reportedly jets in for showdown talks with Ronald Koeman.

The future of the six-time Ballon d’Or winner has been under intense speculation in recent days after apparently substantive reports emerged that the man regarded as the Barcelona’s best-ever player is considering leaving the club after a disappointing season bookended by a humiliating 8-2 Champions League thumping by Bayern Munich last week.

The alarmingly poor form cost former boss Quique Setien his job, as well several other backroom staff members including technical secretary Eric Abidal, but the new man in the Camp Nou dugout, Ronald Koeman, said in his first press engagement that he hopes to convince Messi to remain in Catalonia.

“I don’t know if I have to convince Messi,” Koeman said this week. “I don’t know if it’s a yes or a no. Messi is the best player in the world and you want him on your team, not on your opponent’s.

However, it appears as though Messi wants to hear Koeman’s plans for the upcoming season in person after reports in Argentina and elsewhere stated that he has opted to cut short his holiday in the La Cerdanya area of the Pyrenees to jet in for talks with the Dutchman.

Barcelona president Josep Maria Bartomeu is keen for the Messi situation to have some clarity ahead of the club’s presidential elections next year – with neither he nor Koeman keen to be responsible for the legendary player to depart on their watch.

In addition to Messi, the futures of several of his teammates also remains unclear. The likes of Luis Suarez, Ivan Rakitic and Jordi Alba are all understood to be available in this summer’s transfer window as Koeman looks to put his own imprint on the team he represented as a player for six years in the 1980s and 1990s.

Liverpool’s Dutch midfielder Georginio Wijnaldum, meanwhile, has been reported as one name at the top of Koeman’s shopping list – but the sole focus for the next few weeks will remain intensely trained on extending the record-breaking relationship with Messi.

For Barcelona fans, and indeed everyone associated with the club, the alternative doesn’t bear thinking about. 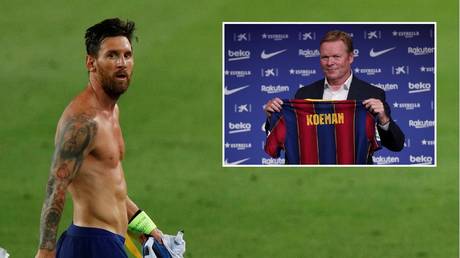