‘Like the Walking Dead’: Dutch star Hateboer plays on after having head wound STAPLED UP following horror head clash (PHOTOS)

‘Like the Walking Dead’: Dutch star Hateboer plays on after having head wound STAPLED UP following horror head clash (PHOTOS)

Gritty Dutch defender Hans Hateboer showed his mettle after playing on in his team’s draw with Spain despite being involved in a gory clash of heads with rival Jose Gaya.

The pair collided just before the half-hour mark of the friendly in Amsterdam, leaving both men bloodied and battered.

Spaniard Gaya suffered a wound above his left eye which began bleeding heavily, causing the Valencia left back to leave the field for further treatment and be replaced by Tottenham star Sergio Reguillon.

Atalanta ace Hateboer was also wounded, in his case on the top of his head, but remarkably played on for the rest of the half after being stapled up on the touchline.

The right back was then replaced at the interval by PSV Eindhoven’s Denzel Dumfries, which Netherlands boss Frank de Boer later explained was a ‘precaution’ after the player had received four stitches.

Spain were 1-0 ahead at the time of the incident thanks to Sergio Canales’ 18th-minute strike, but the Dutch leveled soon after the break through Manchester United midfielder Donny van de Beek, who was returning to the Amsterdam Arena, his former stomping ground when he was at Ajax.

Giving an update on Gaya’s condition after the game, the Spanish football federation said on Twitter that the 25-year-old had “suffered a contusion (blunt incision) on his left eyebrow that has caused a gap” and would be assessed further before deciding whether he could feature in the upcoming Nations League games against Switzerland and Germany.

Amid intense criticism over international matches going ahead despite heavily congested domestic fixture lists, the Netherlands also lost central defender Nathan Ake just six minutes into the game when he pulled up clutching his hamstring.

Ake played no further part in the game, which ended at 1-1, and will return to club team Manchester City where Pep Guardiola and Co. will no doubt be sweating on his fitness.

The brutal scenes in Amsterdam saw some football fans compare the game to an episode of zombie series ‘The Walking Dead’.

At this rate, Netherlands-Spain is resembling an episode of The Walking Dead.

In first 30 minutes of game, there have been 2 players substituted due to injuries (Ake and Gaya). And Hateboer had his head split open and needed stitches before returning to action. #NEDESP pic.twitter.com/57vrjEGOcK 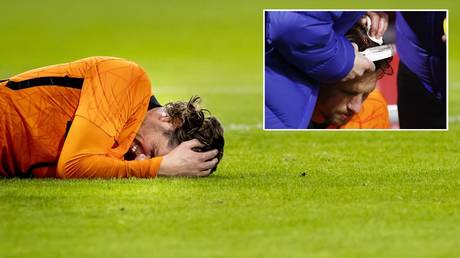