‘Like dating a guy that you know sucks’: Serena Williams offers unusual explanation for shock defeat to Greek ace Sakkari

‘Like dating a guy that you know sucks’: Serena Williams offers unusual explanation for shock defeat to Greek ace Sakkari

Serena Williams said she “put herself in a bad situation” as the US star crashed to a shock defeat against Greece’s Maria Sakkari in the third round of the Western & Southern Open.

Third seed Williams took the first set 7-5 against Sakkari and was just two points from victory as she served for the match in the second, before the Greek star battled back to win a tie-break and then ease to the third set 6-1.

The result will raise questions over Williams’ form ahead of next week’s US Open, where she will again be attempting to haul herself level with Margaret Court on 24 Grand Slam titles.

“I don’t think that helps mentally, when you know the match is over and you won the match, and now your legs were already tired, and now they’re even more tired,” Williams said after her defeat to 13th seed Sakkari.

“I put myself in a bad situation. It’s like dating a guy that you know sucks. That’s literally what I keep doing out here. It’s like I have got to get rid of this guy. It just makes no sense. It’s frustrating.”

The Western & Southern Open is usually held in Cincinnati but is this year being played at Flushing Meadows in New York – the venue for the US Open – as part of the bubble created before the Grand Slam gets underway next week.

“It’s hard to play the way I’ve been playing and to stay positive. And to play nine hours in a week is too much. I don’t usually play like that,” the 38-year-old Williams added.

“I literally should have won that match. There was no excuse. It was tough, but I had so many opportunities to win. I have to figure that one out, how to start winning those matches again.”

For the 25-year-old Sakkari it was a victory in her first ever meeting with Williams, and the Greek ace said she was proud of the way she had battled back.

“I’m kind of proud of myself that I came through that match just because of my mentality and my fighting spirit,” said the world number 21.

She next faces Britain’s Johanna Konta in the quarterfinals. 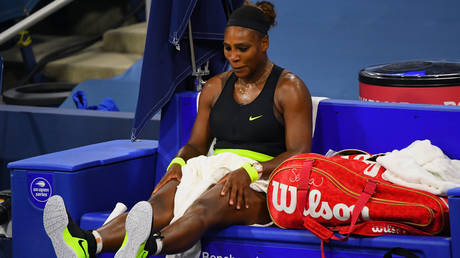