Close
Trending News
HomeSportLights out: NASCAR drivers trade blows in the dark as PUNCH UP erupts after racetrack collision (VIDEO)

Lights out: NASCAR drivers trade blows in the dark as PUNCH UP erupts after racetrack collision (VIDEO)

Lights out: NASCAR drivers trade blows in the dark as PUNCH UP erupts after racetrack collision (VIDEO)

Tempers frayed in the pit lane at the Xfinity Series in Kentucky on Friday as drivers Harrison Burton and Noah Gragson traded blows in a fierce bust-up after their cars collided on the track minutes before.

With just 13 of 200 laps remaining in the race, Gragson’s No. 9 JR Motorsports Chevrolet clipped the back of Burton’s No. 20 Joe Gibbs Racing Toyota, causing both cars to graze the outside wall and lose ground on the race leaders.

After the checkered flag, television cameras captured footage of a clearly irate Burton approaching and pushing his rival – who retaliated by throwing a punch. The two men continued to grapple before they were separated by NASCAR officials.

Afterwards, Burton told the media that he thinks he did his fellow drivers a favor.

“That’s two times since we’ve come back after the Covid-19 pandemic on restarts,” he said. “Same situation. We rallied all night to get our DEX Imaging Supra into fourth place, and then the 9 happens to start in third and — I don’t know — forgets what race track we’re at or what. But both times, puts us in the fence. Charlotte (Motor Speedway) and now here.

“I had a lot of people come up to me afterwards saying that was a long time coming, so I guess that was a popular move.“

His sparring partner wasn’t quite so forthcoming with the media.

“We’re all racing hard,” Gragson said, offering his take on the incident and ensuing scuffle. “I mean, us teammates are beating and banging for the finishes at the end. I don’t really have a comment. I haven’t really seen everything that happened.”

Both drivers ultimately finished the race, with Gragson placing 7th and Burton 12th. 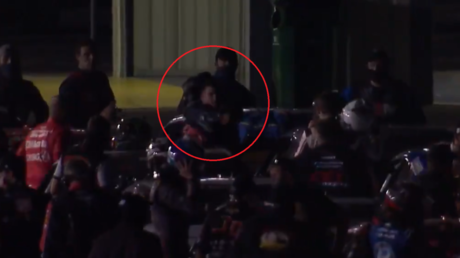 Brazil icon Ronaldinho to REMAIN u...