Stonewall UK, a prominent gay rights charity, has called to place trans female athletes in rugby alongside cis-players. Even though comments to the tweet were restricted, the endorsement still faced a backlash.

The LGBT group waded into the minefield of trans inclusion into athletics on Friday, sharing a demand addressed to national rugby clubs with its 208 thousand followers on Twitter. The clubs should “stand with us against a ruling that is exclusionary and that will impact some of the most vulnerable people in the community”, the tweet said.

“We are asking rugby clubs at all levels of the game to stand with us against a ruling that is exclusionary and that will impact some of the most vulnerable people in the community”.

The “vulnerable people” in question are trans athletes, who developed as males before transitioning and becoming players in women’s rugby teams. They are currently allowed to compete as long as they keep their testosterone levels low enough. However World Rugby, the international governing body for the sport, may change that.

A draft proposal on the issue prepared by a working group earlier this year has recognized that the current system doesn’t recognize any physical advantages that trans women may have over their cis-gendered counterparts, a Guardian report said in July. Allowing someone who has gone through male puberty to take part in women’s games creates significant risks to female participants during tackles, scrums and mauls, the draft said.

Trans rights groups and some clubs have publicly opposed the possible change of rules after it was reported. Stonewall, a veteran LGBT lobbying group with over three decades of history, endorsed a statement expressing support for trans players, inevitably coming under fire from people from the opposing camp.

Angry responses said Stonewall apparently was OK with exposing women to horrific injuries, suggesting that such a stance may be “misogynistic” in itself.

I knew a guy whose 6’6” rugby player brother crashed into another guy and broke his leg in five places. The cracking of the bones was loud enough to be heard by all the players. Imagine if he had crashed into a woman. Now imagine anyone cheering for this. This is you, StonewallUK https://t.co/1Diyyn4a27

This disgraceful display of misogyny has attracted so much criticism that @stonewalluk has limited who can reply. A more intelligent response might have been to accept that the position was totally misguided and to apologise. https://t.co/XpFAR04Ler

Others sarcastically congratulated the group for exposing “a transphobic myth” that there were physical differences between trans and cis women. Or argued that the future of female rugby may be trans for all the wrong reasons under current rules.

The idea that there are biological differences between trans women and cis women is a transphobic myth.

I defy anyone to identify the trans women in these photos. https://t.co/3A8PYwmIZJ pic.twitter.com/NkAfbRpro4

Many wondered why Stonewall chose to use Twitter’s new feature and shut down comments to all accounts except those it follows, forcing outside critics to retweet the original post instead.

Stonewall, who have over 200k followers, are so confident of their position that they have blocked replies.@WorldRugby are absolutely correct to value women’s lives, safety and participation. Thank you for listening to experts, science & evidence. https://t.co/Y6TzLwiwVa

If it was an attempt to muffle opponents, it didn’t seem to work well: with over a thousand retweets and just over 200 ‘likes’, the critics were safe to assume Stonewall got ‘ratioed’ pretty badly. 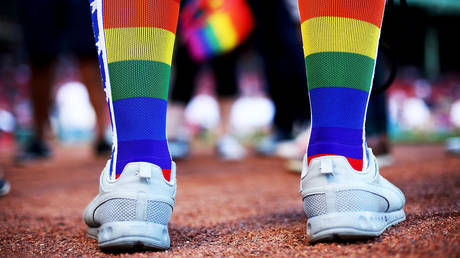 Saudi Arabia refuses to learn from...

'The family has not received...