A video allegedly showing American billionaire Robert Kraft engaging in sex acts at a Florida massage parlor cannot be shown in court, it has been ruled, striking a blow to the prosecution in the ongoing prostitution case.

An appeals court within the state ruled on Wednesday that Kraft, 79, the business magnate who owns the New England Patriots, had his rights violated when police secretly recorded him and others allegedly paying for sex acts at the massage parlor in Jupiter, Florida, which came as part of a larger investigation into human trafficking.

The court cited Kraft’s Fourth Amendment rights, which protects him from “unreasonable searches and seizures.”

“The type of law enforcement surveillance utilized in these cases is extreme. While there will be situations which may warrant the use of the techniques at issue, the strict Fourth Amendment safeguards developed over the past few decades must be observed,” the court announced.

“To permit otherwise would yield unbridled discretion to agents of law enforcement and the government, the antithesis of the constitutional liberty of people to be secure against unreasonable searches and seizures.”

Should the ruling fail to be overturned by the inevitable appeal to the state Supreme Court, it will almost certainly mean that the case against Kraft – and several others linked to it – will be dropped due to a lack of evidence, but the case against individuals linked to the Orchids of Asia parlor will likely proceed as additional, non-video evidence exists against them.

Kraft and others were charged with solicitation of prostitution in February last year after a police investigation which included the installation of cameras inside the massage parlor, with the authorities saying the tapes showed Kraft being involved in paying for sex acts with women. He subsequently apologized but pleaded not guilty.

The prosecution had argued that the video evidence in crucial to their case as it establishes that the massage parlor was complicit in receiving cash payments as a result of prostitution, and shows that Kraft, other men and the masseuses were engaged in crime.

The police also alleged that 95 percent of the massages performed on men ended with sex acts.

“Given the unique and difficult circumstances confronting these officers, the conspiracy, the logistics of the operation, what they reasonably anticipated they would see and the difficulty of knowing at the start of any given massage will this end with a ‘happy ending’ or will it not, we think what law enforcement did here was entirely reasonable,” state deputy solicitor general Jeffrey DeSousa said. 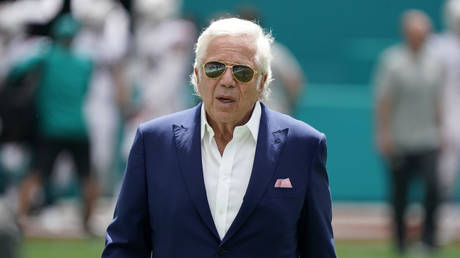