New UFC champion Petr Yan was stunned to be given a brand new Mercedes outside the sports academy where he trains in Ekaterinburg, admitting his surprise at the reward for his brutal win over Jose Aldo at UFC 251 on Saturday.

New bantamweight king Yan took his new belt with him as he attended a ceremony at the city’s Archangel Michael fight club, where crowds gathered to cheer the victorious fighter as he embraced the club founder and representatives of endorsers the Russian Copper Company.

The motor fan smiled as cameramen followed him to the driver’s door of the vehicle, where he briefly inspected his expensive new car before heading inside the club for a photo with members in front of a punchbag.

“I knew that some kind of surprise awaited me,” said the 27-year-old, describing the Merc as “very nice”.

“This is a huge gift,” Yan said. “I like cars. With many cars, I sit down and feel that some kind of unity is taking place.”

Yan, who made his MMA debut in 2014, said that he hoped his newfound stardom would encourage newcomers to follow his lead, advising them to “just train and show results.”

‘No Mercy’ lived up to his nickname by pounding Aldo in the latter stages on Fight Island to earn a fifth-round win that made him the second Russian UFC champion after lightweight luminary Khabib Nurmagomedov.

Fans including world light heavyweight champion kickboxer Alim Nabiev and Russian former MMA title holder Albert Duraev were among those to congratulate Yan after he reposted the video to his following of almost 500,000 on Instagram. 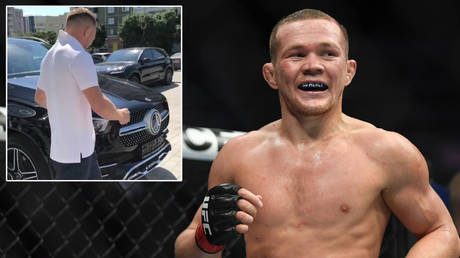 What the cluck? KFC to offer Russi...