Lionel Messi celebrated Argentina’s first win in the 2021 Copa America with a sweary post in which he was also captured taking an ice bath with teammates following a 1-0 victory over bitter rivals Uruguay in Brasilia on Friday.

The two-time World Cup winners, chasing their first major trophy since they won this tournament in 1993 with the likes of Gabriel Batistuta and Diego Simeone, started their campaign with a 1-1 against Chile on Monday.

Messi scored a fantastic first half free-kick to try and exact some revenge on the outfit that beat him in the final in 2015 and 2016, but an Eduardo Vargas equalizer which former Barcelona teammate Arturo Vidal played a part in meant the points were shared.

Next up last night were neighboring rivals Uruguay, who boasted another ex-Blaugrana star and close friend Luis Suarez up front.

Argentina defeat Uruguay 1-0 and get their first win of the 2021 Copa America 💪 pic.twitter.com/MUScmi1rrQ

This time round, though, La Albiceleste took the lead again but fared better by managing to hold onto it for a 1-0 win when all was said and done.

Setting Guido Rodriguez up for the 13th-minute winner, Messi was awarded his second Man of the Match gong of the tournament so far and took to Instagram to celebrate his country heading to the top of Group B.

“This will give us peace of mind for what’s coming that will continue to be hard,” he added, alongside a photo that saw him taking an ice bath with teammates including Nicolas Otamendi, Leandro Paredes and Angel Di Maria.

Once more a substitute reduced to a bit-part cameo, Di Maria agreed with this sentiment.

It’s all love between Angel Di Maria and Edinson Cavani

“We’ve lacked a bit of luck to get victories,” the PSG winger said post-match.

“Today we managed to do that against a direct rival who are always contenders for the Copa America.

“Brazil are the best team [up until now],” he insisted, of the current holders and hosts.

“[But] we’re taking it step by step and the dream is alive. I hope we can make it come true.”

“Argentina are always a candidate (for the title) but Brazil are at home and are doing things very well,” Di Maria finished.

Messi is certainly up for the fight.

Pictured exhausted and laid out on the turf of the Estadio Nacional Mane Garrincha, his highlight reel from the match shows him at his mercurial best while embarking on slalom dribbles and constantly trying to move Argentina forward against a tough foe.

Incase you missed it.
Messi vs Uruguay.pic.twitter.com/IqbLpAzVzt

Next up for Lionel Scaloni’s troops is third in the group Paraguay, who have already beaten Bolivia 3-1, on Monday.

And on the same day a couple of hours before, Uruguay play Chile while still looking for their first win. 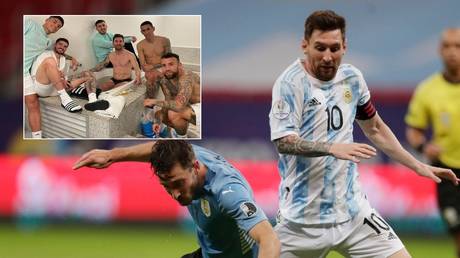