Close
Trending News
HomeSport‘Leaving it all out there’: Norway triathlete THROWS UP after winning gold in Tokyo before being placed in wheelchair

‘Leaving it all out there’: Norway triathlete THROWS UP after winning gold in Tokyo before being placed in wheelchair

‘Leaving it all out there’: Norway triathlete THROWS UP after winning gold in Tokyo before being placed in wheelchair

Norway’s Kristian Blummenfelt vomited and had to be placed in a wheelchair after pushing himself to Olympic triathlon glory in stifling conditions in Tokyo, but afterwards claimed he’d been hoping for even hotter weather.

Blummenfelt powered away from his rivals with around 1km to go of Monday’s race, holding them off to win by 11 seconds from Great Britain’s Alex Yee and with New Zealander Hayden Wilde coming home third.

The race had started at 6.30 am local time in Japan, supposedly to avoid the stifling summer heat but with temperatures still pushing 29C (85F) and humidity levels of around 67%, albeit with a slight breeze.

The grueling conditions left the competitors sweat-soaked and drained, with Blummenfelt summing up the suffering with the excruciating look on his face as he kicked on to the finish line.

Blummenfelt is such a relatable super athlete. The suffering on his face is something we have all felt pic.twitter.com/219thSGkdd

On crossing the line the Norwegian clutched at the finishing tape, collapsing onto the floor in a mixture of joy and sheer exhaustion.

Moving onto his hands and knees, the 27-year-old was seen vomiting before being helped to his feet by Kiwi bronze medalist Wilde and then placed into a wheelchair to be checked by medics.

Just being able to finish the #Triathlon is a testament of the heart these athletes have. I am in awe.

And what a finish by Norway! Also look at Wilde helping out Blummenfelt. These athletes know what it takes to just get across that line. pic.twitter.com/CAd7G3uq3l

Not my sport, but this guy is an absolute don. Quite a big lad when compared to the other folk, had the serious Fabio Aru pain face, killed himself half to death, threw up after the finish line and carted away in a wheelchair. What a bloke, Kristian Blummenfelt! 🥇 #Tokyo2020 pic.twitter.com/Ll5doh6Lhw

Onlookers including British Olympic rowing legend Matthew Pinsent were impressed by the level of pain to which Blummenfelt was willing to push himself in pursuit of glory.

“Outstanding gold from Blummenfelt. Pushing till you vom is full on,” wrote the four-time gold medalist.

Others said his efforts gave a new meaning to “leaving it all out there,” while the finish area strewn with exhausted athletes was described as resembling a “battlefield.”

Outstanding gold from Blummenfelt – pushing till you vom is full on.

The Norwegian team’s choice of all-white attire for their athletes also drew attention as the sweat-drenched Blummenfelt raced through the streets with his underwear showing.

Whoever designed Norway’s triathlon kit for #TokyoOlympics2021 must have been inspired by Captain Underpants(?). Amazing finish by Blummenfelt though. Clearly the superhero outfit worked! pic.twitter.com/yYxUSLIIj3

The Bergen-born star had recovered from his remarkable exertions in time for the medal ceremony, where he waved in joy at bagging Norway’s first medal of the 2020 Games.

Remarkably, Blummenfelt claimed that he had been hoping for even more challenging conditions in Tokyo, believing they would give him the edge over his rivals.

“Our team is world-leading for heat preparation so we were a bit disappointed it was not as warm as we were hoping for,” he said.

“I’m from Bergen where for two thirds of the year it’s windy, rainy and 10 degrees but that just shows the strength of the team around us in getting that preparation.”

Blummenfelt’s preparation had involved training in Yokohama in May, where he said he had perfected his race tactics of kicking on in the final kilometer – as he did to devastating effect on Monday.

It’s a defining moment for the Norwegian 🇳🇴

“I’ve been thinking about this race for so many years,” said the Norwegian star, who completed the 1,500m swim, 40km bike ride and 10km run in a time of one hour, 45 minutes and four seconds.

“I was on holiday here many years ago and thought to myself ‘OK, your goal is to win an Olympic gold medal here in 2020.’

“I knew I couldn’t outkick them [my rivals] on the carpet [finishing straight], but I could use my engine and really bring it home.”

After tennis stars such as Russia’s Danill Medvedev and Anastasia Pavlyuchenkova also noted the trying conditions in Tokyo, some have accused organizers of “lying” about how severe they would be.

“So why did the Japanese claim otherwise? And why did the International Olympic Committee, in granting the bid without comment about the conditions to come, just let them say it?”

Wetzel pointed to claims from the organizers that this time of year in Tokyo “provides an ideal climate for athletes to perform their best.”

Monday’s triathlon race had begun in bizarre circumstances when a boat blocked the route for around half the competitors at the start line.

Dozens of athletes were left unable to enter the water when the starting gun went off, watching their rivals swim off into the distance before a restart was ordered.

Blummenfelt was one of those who had dived into the water, and claimed it had actually helped as he “got a little pre warm-up before the start.” 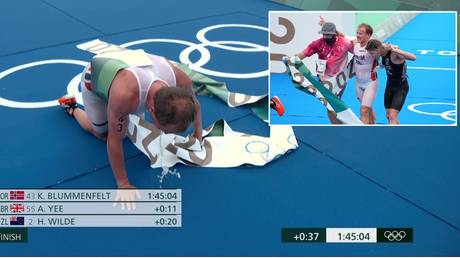