New UFC signing Umar Nurmagomedov – cousin of lightweight champion Khabib – makes his bow for the promotion in July, but RT Sport has continued its look at the path that paved the way for the rising bantamweight star.

Dagestani prospect Nurmagomedov faces Britain’s Nathaniel Wood in his UFC debut on ‘Fight Island’ in Abu Dhabi on July 25, as he arrives in the octagon for the next step of a journey in which he seeks to emulate some of the success of his revered cousin, and which, like Khabib, was forged in the formidable MMA furnace of the Russian Caucasus.

Having already charted the 24-year-old Umar’s rise in previous episodes of ‘Land of Warriors’, the series returns with a look at how the undefeated youngster continued on his route to the UFC with victory in the Gorilla Fighting Championship last year.

Also featured is Timur Valiev, a 30-year-old fellow bantamweight still dreaming of a shot at the big time as he enters his second decade as a professional fighter.

You can watch the full episode of ‘Land of Warriors: Fight Night’ in the video embedded at the top of the page. 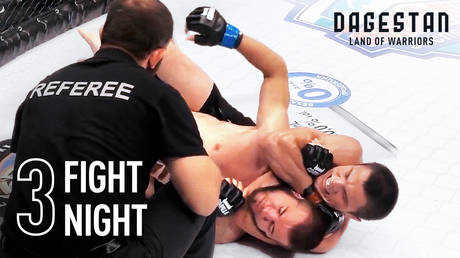