‘Lampard is in for him’: Ex-England ace Ferdinand stirs Lionel Messi-to-Chelsea frenzy with outlandish tweet

‘Lampard is in for him’: Ex-England ace Ferdinand stirs Lionel Messi-to-Chelsea frenzy with outlandish tweet

The disgruntled Messi informed the Catalan giants of his intention to quit the club in a fax message on Tuesday, claiming he was within his rights to walk away for free due to a contract clause which allows him to leave at the end of each season.

Barcelona have disputed that stance, asserting that the clause in question expired in June and that Messi is under contract at the Nou Camp until the summer of 2021.

Despite a looming legal battle, Messi appears intent on forcing his way out of the club he has been at since he was 13 years old, having grown disillusioned with performances on the pitch and turmoil in the boardroom and dugout.

The news that Messi is ready to quit has set off a frenzy of speculation on where he may end up next, with the likes of the Abu Dhabi-backed Manchester City, megaclub rivals Manchester United and Italian giants Inter Milan and Juventus among the names most frequently linked with the Argentine maestro.

But ex-England star Ferdinand threw Lampard and Chelsea into the mix with an explosive tweet on Tuesday night.

“Just heard Frank Lampard is now in for #messi Some window this if Lamps pulls this off!!,” Ferdinand tweeted excitedly to his 10.7 million followers.

Just heard Frank Lampard is now in for #messi
Some window this if Lamps pulls this off !!

Ferdinand was likely being tongue-in-cheek with his claims, although the Stamford Bridge club owned by Russian billionaire Roman Abramovich have not been shy in opening the purse strings so far this summer.

Abramovich is preparing to back Lampard to the tune of more than £230 million ($300 million) in a transfer overhaul, having already signed wing wizard Hakim Ziyech from Ajax and young German forward Timo Werner from RB Leipzig.

Chelsea are expected to add Leicester full-back to that list in a £50 million deal in the coming days, as well as Brazilian central defender Thiago Silva, who is a free agent after leaving Champions League finalists Paris Saint-Germain.

The Blues are also in negotiations for what is set to be a club-record deal for German midfield prodigy Kai Havertz from Bayer Leverkusen, who could end up costing them around £100 million.

But the arrival of 33-year-old Messi at Stamford Bridge would eclipse all of that and would be the biggest coup to ever come through the doors during the Abramovich era.

Fans, however, seemed skeptical over Ferdinand’s tweet, even joking that the former United star was aiming to jinx a Messi-to-Chelsea move from ever happening.

No way you just jinxed us for something positive…

“No way you just jinxed us for something positive,” wrote one.

“Rio, don’t even joke like that. Messi needs to join a big club,” added another.

Ferdinand’s former club Manchester United have been among those linked to Messi, although crosstown rivals Manchester City are widely seen as the frontrunners to secure his signature, should he end up leaving Barcelona.

City manager Pep Guardiola – who enjoyed spectacular success with Messi in his four years as Barcelona manager between 2008 and 2012 – is reported to have already spoken to the star about a possible link-up at the Etihad Stadium.

City are also believed to have looked at possible ways of making a deal financially feasible, although much will depend on whether Messi is able to walk away from the Nou Camp for free, as he intends to do. 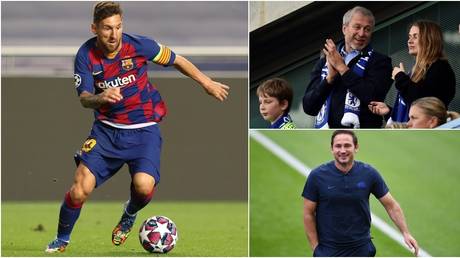