LaLiga president Javier Tebas says that Barcelona must make cuts before agreeing a new contract with Lionel Messi, with the club facing the prospect of the league refusing to register his deal unless financial guidelines are met.

Messi’s contract with the Catalan club is set to expire in nine days and no official announcement has yet been made by the player or the club itself regarding an extension, despite speculation in the Spanish media suggesting that talks between Messi and the club have proceeded satisfactorily.

It is expected that Messi will agree terms to a new deal with his boyhood club before his current contract expires, but if Barcelona manage to convince their one-time wantaway star player to remain in Catalonia, it may open up a can of financial worms elsewhere in the club.

Joan Laporta, who was re-elected as club president earlier this year, partly campaigned for the position on a platform of convincing the Argentine to extend his 20-year stay with the club, but if he delivers on that particular promise it could potentially plunge the cash-strapped club into further financial difficulty.

And in that scenario, Tebas says that the league would be forced to take action.

“Barcelona have exceeded their wage cap,” Tebas said this week. “I hope they can keep Messi, but to do so they will have to make cuts elsewhere.

As noted by ESPN, before the start of the Covid-19 pandemic Barcelona had a salary cap of €671 million – the highest in La Liga. That figure has plunged to €382.7 million ahead of the upcoming season.

Barcelona were granted some time to make the necessary adjustments but their financial position prevented them from registering Memphis Depay last season despite a deal with the Dutchman’s former club Lyon – and LaLiga’s rulebook says that the the league could take similar measures when it comes to Messi’s prospective new deal.

The matter is complicated by Barcelona already making some high profile additions to their wage bill this off-season, with the likes of Sergio Aguero, Eric Garcia and Depay all joining.

It is thought that players such as Samuel Umtiti, Philippe Coutinho, Miralem Pjanic, Martin Braithwaite and several others could be available for transfer this summer, but so far Barcelona have yet to locate any serious prospective suitors.

“The severity of the situation depends on the resources they are capable of generating,” Tebas added. “Barca have to restructure their debt. If they manage that, the situation won’t be serious.

“But they have taken their wage bill to the limit. And when football has coughed – or, better put, punctured a lung – they haven’t wanted to absorb that loss of income. They must take measures.

“Of the €700 million losses [across La Liga], half of it is for Barcelona. There are other big clubs that have made a bigger effort to avoid it. Real Madrid have made a commendable effort to ensure their losses aren’t the same as Barca, who take the trophy for losses.”

Just two days ago Barcelona secured a €525m loan from Goldman Sachs to assist in their financial affairs, with that sum to be spent on clearing the club’s mammoth debts. 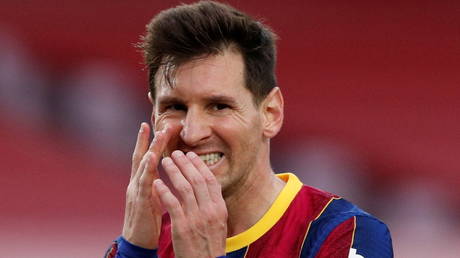