The Los Angeles Lakers will have to wait until the COVID-19 pandemic is over before they can host the “massive victory parade” they have planned after winning their first NBA championship in 10 years on Sunday.

The Lakers topped Miami Heat 106-93 at the AdventHealth Arena in Florida to win the 2020 Finals series 4-2.

According to TMZ, the team, along with LA County and City officials, has mooted a number of ideas as they explore options for celebrating the victory safely with fans.

Those options have included a “car party” – in which fans would be permitted to cheer the team on in a limited number of vehicles – but they have settled on a traditional parade with the proviso that they must have a green light from the officials before they can proceed.

Lakers fans defied pleas from Los Angeles mayor Eric Garcetti not to gather in public to celebrate the win, with some joyous supporters setting off fireworks in the streets.

The celebrations prompted a confrontation with riot police, who fired tear gas into a crowd of fans.

The NBA championship was LA’s 17th title, with LeBron James contributing 28 points and 10 assists to Sunday’s win, while Anthony Davis scored 19 points and made 15 rebounds. 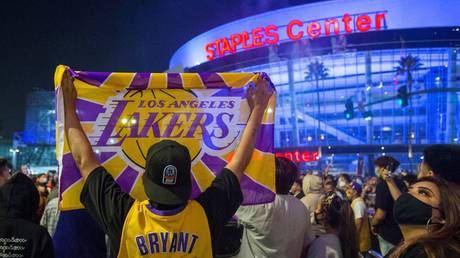