Dutch manager and former Barcelona sweeper Ronald Koeman is set to be appointed successor to the soon-to-be-departing boss Quique Setien, according to reports in Spain.

Koeman, who is currently the national team coach of the Netherlands, is expected to announce his departure from the Dutch FA imminently to free him up to take over the hotseat at the Camp Nou, where he’ll be tasked with the job of reviving the club’s fortunes after a season that saw them come up short, both in La Liga and in the UEFA Champions League.

The news was announced by journalists in Spain, who have said the appointment is set to be made imminently.

Barcelona, meanwhile, have scheduled a press conference for Monday afternoon, where it is expected that Setien’s sacking will be officially confirmed.

Koeman’s appointment would see the Dutchman return to the club where he spent six years as a player, and two as an assistant coach. The 57-year-old has previously managed Vitesse Arnhem, Ajax, Benfica, PSV Eindhoven, Valencia, AZ Alkmaar, Feyenoord, Southampton, Everton and, currently, the Dutch national team.

As a player at the Camp Nou, Koeman operated both in front of and behind the defense, and his ability to score from long range, especially from set-pieces, saw him notch 67 goals in 192 league appearances for the club.

During his time at Barcelona, he won four consecutive La Liga titles, a Copa del Rey and three Supercopa de Espanas, as well as the European Cup in 1991/92, where his thumping extra-time free-kick gave Barca the win against Sampdoria at Wembley Stadium. Koeman and Barca then went on to win the European Super Cup the following season.

Now it seems Barcelona are ready to pin their hopes on Koeman to return that sort of success to the club as a manager, with the Dutchman expected to take over from Setien in the coming days. 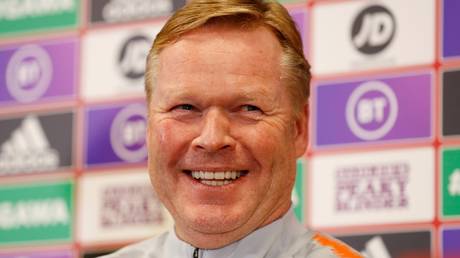