Close
Trending News
HomeSportKoeman? Pochettino? With Quique Setien set for the axe, who’s next for the Barcelona hotseat?

Koeman? Pochettino? With Quique Setien set for the axe, who’s next for the Barcelona hotseat?

Koeman? Pochettino? With Quique Setien set for the axe, who’s next for the Barcelona hotseat?

Under-fire Barca boss Quique Setien seems certain to be sent packing following his team’s humiliating 8-2 reverse against Bayern Munich, but who is in line to help oversee the club’s attempt to return to the European elite?

The Barcelona hierarchy will hold an emergency board meeting on Monday after their dismal European exit on Friday night, as well as stuttering in the final days of La Liga as they surrendered their crown to Zinedine Zidane’s Real Madrid.

The desire to steady the ship was placed into sharp focus with the recent reports stating that their superstar player, Lionel Messi, has demanded to leave the club due to his frustration at how it is being run.

Setien, along with several members of his backroom staff, look certain to face the axe leaving the club’s president, Josep Maria Bartomeu, in a position of having to identify the ideal candidate capable of arresting the team’s decline and managing the egos in the locker room.

But who will they be looking at?

The Dutchman spent six years in Catalunya between 1989 and 1995, becoming part of the first-ever Barca team to lift the European Cup/Champions League in 1992, and is understood to be Bartomeu’s first choice to take over ahead of next season.

Currently in charge of the Netherlands national team, Koeman has an extensive pedigree as a coach, having managed in several of Europe’s top leagues and has been crucial in reversing the fortune’s of the previously underperforming Dutch side.

The Barcelona job would be the biggest of his career to date but his status as a legendary figure at the Camp Nou would immediately ingratiate himself to the supporters.

Not so long ago, Pochettino was one of the hottest managerial properties in world football, authoring Tottenham Hotspur’s unlikely trip to a Champions League final and installing the Londoners as legitimate Premier League title prospects.

Things fell off the rails last season, however. A lack of funds in the transfer market, coupled with the loss of form of a few key players, resulted in Spurs starting the campaign on the back foot, and they never fully recovered.

Pochettino was replaced by Jose Mourinho mid-season and the Argentine’s stock dropped as a result – but speculation exists which suggests that Pochettino could be the man best suited to calming Lionel Messi’s wandering eye.

If “Barca DNA” is all that is required of the new head coach at the Camp Nou, they need look no further than one of the club’s best-ever midfielders.

Through 767 appearances, Xavi became a fundamental part of the best-ever Barcelona team and has since begun cutting his managerial teeth in Qatar.

Reports earlier this summer suggested that Barca had made tentative moves to sound him out for next season, but he opted instead to extend his contract with Al-Sadd.

Of course, Barcelona possess the financial clout to buy him out of practically any contract, but it remains to be seen if Xavi has identified this moment as the ideal one to return to the club at which he is an undoubted legend.

The World Cup-winning former French national team coach Blanc has been out of work since leaving Paris Saint-Germain in 2016, but has remained linked with practically every high-profile job which has become available since.

His status as another Barca alum means that he will once again have his name mentioned in relation to the top job but it is understood that Bartomeu favors several other candidates ahead of the Frenchman.

Still, the ex-defender commands respect in the game and has played and managed at the highest level – but the four years absence from a top European job could hurt his candidacy amid the ever-developing trends of modern, attacking football.

If Bartomeu wants to follow the Pep Guardiola blueprint once again, then Barca B boss Garcia Pimento might just fancy his chances.

Pimento would be the candidate most familiar with the current crop of youngsters graduating from the club’s famous La Masia academy and could theoretically be tapped to oversee a grassroots overhaul at the club, or installed as a ‘steady the ship’ coach while the club spends further time to identify another person for the job.

However, with the Barcelona presidential elections due next year – and the club seemingly enduring their worst spell in recent memory – Bartomeu will be feeling the heat to make the correct, and most popular, appointment. Failure to do so would be unthinkable for one of Europe’s most historically successful clubs, and could even lead to Bartomeu losing his grip on the club he has been in charge of since 2014. 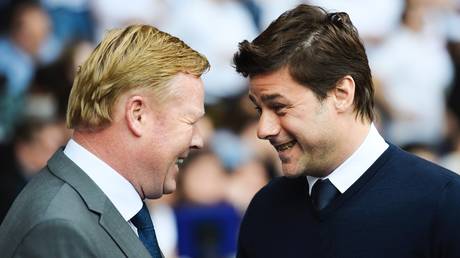