Former UFC flyweight Magomed Bibulatov staked a strong claim to KO of the year with his incredible finish of Brazil’s Rodrigo Praia at ACA 112 in Grozny on Sunday.

With just over a minute gone inside the first round in the Chechen capital, Bibulatov backed Praia up against the cage by throwing out several jabs before displaying impeccable technique as he unleashed a spinning wheel kick flush in the face of his opponent, knocking the Brazilian out cold as he crashed head-first onto the canvas.

🌪 SPINNING BACK KICK KNOCKOUT! Magomed Bibulatov is applying for the BEST knockout of the year! #ACA112 pic.twitter.com/MyOpWHWte8

The spectacular KO from the 32-year-old Chechen instantly set social media alight, earning plaudits as a certified KO of the year contender – if not outright claimant to the accolade.

I refuse to believe something more spectacular will happen in the sports world today. Should be #1 on SportsCenter @espnmma

“This is the KO of the year for sure and it isn’t even close. This @ACA_League show was one of the best of the year,” wrote one fan.

“Goddamn that was perfect,” said another awestruck observer.

This is the KO of the year for sure and it isn’t even close. This @ACA_League show was one of the best of the year

Goddamn that was perfect

The destructive victory was Bibulatov’s third on the spin since he left the UFC last year, having had a three-fight spell in the promotion in which he began with a win on his debut in 2017 before suffering back-to-back defeats and leaving the promotion.

‘Chaborz’ improved his career ledger to 17 wins in 19 fights, while 29-year-old opponent Praia suffered a first loss in five fights and a fourth overall in his 19 contests.

Elsewhere on an entertaining night in Grozny, Rasul Albaskhanov secured an explosive KO in his contest with Alexey Shaposhnikov. 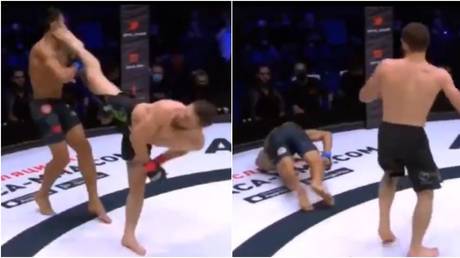