Street football has broken out at a protest in Moscow over the imprisonment of Kremlin anti-corruption activist Alexey Navalny, where participants have been spotted improvising with a riot police helmet for some impromptu fun.

Members of the demonstration, which has reportedly seen at least 10,000 people march on the streets of the capital in a display of solidarity with Navalny, could be seen forming a circular formation of the kind often deployed by teams in what is commonly known as a “rondo”.

RT Sport footage showed three players passing the unwieldy makeshift ball between themselves before it was hooked into the center of the large circle, where a figure moved forward to scoop the helmet to the other side of the group.

The clip quickly racked up almost 50,000 views on Twitter as viewers watched the helmet bobble across the packed street.

Crowds at today’s protest in Moscow against the imprisonment of Kremlin opposition leader Alexey Navalny have an impromptu kickaround with a riot police helmet in the street.

The crowds are said to be shouting anti-government slogans and carrying placards while calling for the release of Navalny, who was taken to custody for 30 days after returning to Moscow from Germany last weekend.

Navalny is accused of violating the terms of his three-and-a-half-year sentence, suspended for a total of six years, for a previous fraud conviction.

The politician’s name caused a minor stir when it was mentioned during a live TV broadcast of a match between Germany and Mexico during the 2018 World Cup in Russia.

When an adjective was used to describe “high-pressure soccer” that was identical to Navalny’s name, former Russia manager Leonid Slutsky, who was co-commentating, asked if Navalny played football.

The remark resulted in a deluge of imagery and memes on social media featuring Navalny playing football. 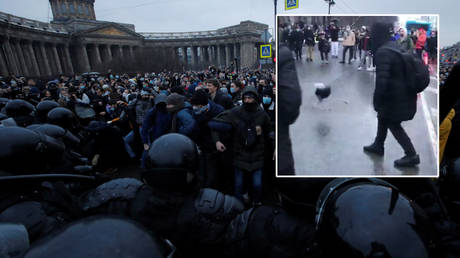 Why did bitcoin suddenly erase all...