Khamzat Chimaev revealed that his debuting teammate, Guram Kutateladze, is ready to make an impact in the UFC, and may look to repeat “The Wolf’s” exploits by asking for a quick turnaround to fight again at UFC 254.

Kutateladze faces a formidable test on his octagon debut Saturday night at UFC Fight Island, where he takes on the unbeaten former two-division KSW champion Mateusz Gamrot in a battle of lightweight newcomers.

But, while Gamrot arrives in Yas Island with a fair degree of hype after compiling a perfect 17-0 record in his native Poland, less is widely known about Georgian Kutateladze, who has a 11-2 pro record.

Chatting to the media from the beachside octagon on Yas Island, Chimaev shared a little more info about his Allstars Gym teammate, and revealed that the debutant has prodigious cardio and a strong, well-rounded skillset.

“In terms of cardio, when we run, Guram is always faster because he’s lighter,” he revealed.

“Sometimes we run up and down stairs 40 times. He finishes first then I catch up – I’m always three or four trips behind him. I always win the strength-based exercises. That’s how we compete with each other. We help each other out.”

Chimaev also said that Kutateladze can hang with him on the wrestling mat, and said he has the power to stun the best the UFC has to offer.

“Of course, he can keep up with anybody (in wrestling),” he said.

“Guram is a complete fighter. His wrestling and grappling are on point. His stand-up, too. We know he can KO anybody.”

Chimaev then confirmed that Kutateladze could potentially look to challenge Russian lightweight contender Islam Makhachev as a replacement opponent at UFC 254, if things go to plan against Gamrot on fight night.

“It may happen. We’ll see how he feels after this fight,” Chimaev said.

“Right now he’s cutting weight. Remember, I cut weight two times. First I dropped to 185 pounds, then 170 pounds. We’ll see how he is after the weight cut. If Islam wants to do it, why not? Guram is ready.” 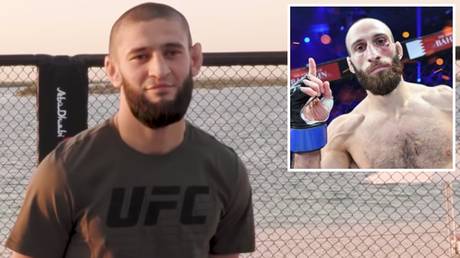