UFC lightweight champion Khabib Nurmagomedov has retained his place atop the Forbes list of the ‘most successful’ Russians under the age of 40, pipping the likes of pop princess Olga Buzova and NHL star Alexander Ovechkin.

Undefeated UFC king Khabib, 31, sits comfortably at the summit of the annual rankings of stars from the worlds of entertainment and sport, released on Thursday by money magazine Forbes.

The rankings assign a score based on overall estimated income in the past year combined with perceived ‘popularity’ through aspects including online mentions and search requests (in Russian), as well as social media following.

Dagestani fighter Khabib – who has an Instagram count of 20.4 million followers – amassed a total of 81.94 points from the Forbes analysts, with his income placed at $16.5 million for the financial year to the end of April.

That put him comfortably ahead of TV presenter-turned pop star Buzova, 34, who was awarded an overall score of 66.55.

Buzova earned a relatively modest $2.7 million from her showbusiness endeavors, although her score was no doubt bolstered by her mammoth Instagram following of 21.3 million – a domain where she has reasserted herself as Russia’s undisputed number one, having briefly relinquished the title to Khabib.

Next came rapper Egor Kreed, 26, with a score of 54.02, while Russian hockey great Ovechkin, 34, took fourth spot with a rating of 51.69 – although the Washington Capitals star’s estimated income was second only to Khabib’s in the table at $15.1 million.

Russian Olympic figure skating champion Alina Zagitova also made the grade again, with the 18-year-old collecting earnings of $1.1 million and an overall score of 13.95, which put her in 31st spot.

Khabib’s rise to fame in his homeland and internationally has been meteoric since he defeated Irish MMA megastar Conor McGregor in Las Vegas in 2018.

Previously seeing his stardom mainly confined to MMA circles and his local Dagestan, Khabib is now a bona fide global star who is held up as a Muslim sporting icon and hero across Russia.

He is expected to return to the octagon to defend his 155lbs title in autumn, having been forced out of his long-awaited match-up with Tony Ferguson in April due to the coronavirus fallout.

That bout would have burnished Khabib’s income even more significantly for the Forbes rankings, although he will have the chance to make up for the lost income when he faces Justin Gaethje in their expected showdown, after the American set up a crack at ‘The Eagle’ by defeating Ferguson in May.

While Khabib likes to do most of his talking in the cage, the Dagestani fighter has previously admitted that he also keeps an eye on his status in the Instagram stakes.

“It’s always nice when you are first. It doesn’t matter if it’s Instagram, in fights, in business,” Khabib said last year of his battle for number one spot against Buzova.

“I think men will understand me, and women as well. If I’m not mistaken, I think women aim to be first even more than men.”

In terms of income, Forbes may well have placed Khabib’s earnings on the conservative side, if the assessment of his father Abdulmanap is anything to go by.

The 57-year-old trainer said earlier this year that his son was likely worth in the region of $100 million, such was the wealth he had amassed through fighting, sponsorship and various public appearances. 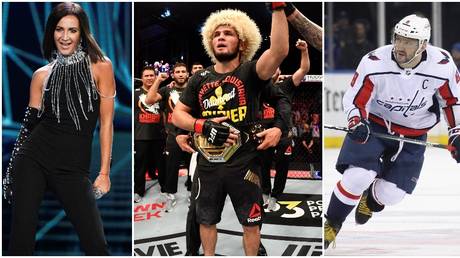 ‘There was vodka on the player...

‘Important to preserve scope for talks with Iran’: Germany warns against escalation after killing of top Iranian scientist

‘There was vodka on the players‘ bus – this is Russia’: Ex-Real Madrid star reveals BOOZY RITUALS after switch from Spanish giants