Ali Abdelaziz, the manager of UFC lightweight champion Khabib Nurmagomedov, says his fighter nixed the UFC’s plans for him to coach an upcoming season of “The Ultimate Fighter” opposite arch-rival Conor McGregor.

Abdelaziz, head of the Dominance MMA stable of fighters, told TMZ Sports that the UFC have explored the idea of booking a rematch of the contentious October 2018 meeting between Nurmagomedov and McGregor which the Russian won by fourth-round submission – and says that the UFC proposed a revival of their long-running reality series which would once again put both fighters at odds with each other.

“He said, ‘Ali, what do you think if Khabib wins, him and Conor do ‘The Ultimate Fighter’ on ESPN?’ This is breaking news. I said, ‘I don’t know. I’ll think about it.’ And he said, of course, [vice versa] if Justin wins.

“It would be Khabib vs. Conor on ‘The Ultimate Fighter,’ coaching. It would have been f***ing huge. Probably would have went to the hospital because he would have beat his ass and his whole team. Or Justin Gaethje vs. [McGregor].”

However Abdelaziz, who also manages Gaethje, confirmed that Nurmagomedov wasn’t interested in what would have been a sizeable payday for the Dagestani native – and that he has zero interest in renewing his rivalry with the notorious Irishman.

“Listen, if Justin wins, whatever, and he wants the easy payday, yeah, go ahead and fight Conor if you want. But I don’t know if even Conor still in the conversation because Justin said, ‘I gotta give him an opportunity,’ but he didn’t want the fight.”

Abdelaziz also hit out at McGregor for releasing private text messages between he and UFC president Dana White after McGregor disputed claims regarding his inactivity, and said that he had been actively campaigning to fight last May.

“First of all, you know, as a man, the golden rule is if you have a private conversation with another man, you should never put this online,” Abdelaziz stated.

“This is a complete – a made-b*tch, you understand? This is like a real-life b*tch, like I’ve always been saying for all these years. I have a lot of text messages about people I don’t like, but I will never put it out there because it’s not even right to put it out there – it’s wrong.

“Second of all, January 2020 – actually, December 2019, we wanted to fight Conor. Conor said he’s not ready yet. When [Gaethje] heard he wanted to fight in January, Justin Gaethje, he was higher ranked than ‘Cowboy’ [Donald Cerrone] by far, and he chose to fight ‘Cowboy’ instead of Justin. Justin called him out on social media. Not one time we saw Conor respond to him.

“But in a way, he showed you what kind of weak man he is. He’s a liar. He’s everything you don’t want to be as a man. He’s not a man. He lost all the value. Guess what? Sports have moved on. The UFC has moved on. We have moved on. When Justin Gaethje turned down probably $7 or 8 million dollars payday [to fight McGregor], it was just for his integrity. To show, ‘Guess what? I can do it better.’ Justin Gaethje’s a f***ing legend, man.”

Abdelaziz continued, saying that if McGregor truly wants to face one of his fighters then Kamaru Usman or Khamzat Chimaev are available – but that McGregor’s long-signaled intention of revenge in his feud with Nurmagomedov is dead in the water. 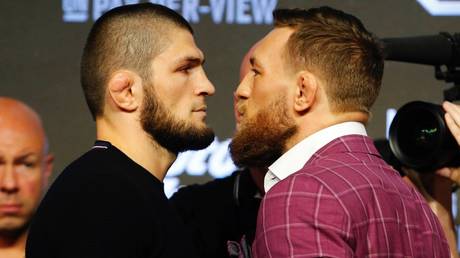