‘Khabib is NOT retiring’: UFC champ’s manager says Gaethje fight will happen in 2020 despite tragic death of Russian star’s father

‘Khabib is NOT retiring’: UFC champ’s manager says Gaethje fight will happen in 2020 despite tragic death of Russian star’s father

Khabib Nurmagomedov is not planning to retire from MMA despite the tragic death of his father Abdulmanap and will defend his lightweight title against Justin Gaethje later this year, according to manager Ali Abdelaziz.

“Khabib is not retiring… he has some goals, he has some things to accomplish,” Abdelaziz told TMZ Sports. “You will see him before the end of the year.”

The undefeated lightweight king is currently mourning the loss of his father and trainer Abdulmanap, who died of complications stemming from a Covid-19 infection earlier this month.

Khabib has not spoken publicly since his father’s passing, while UFC boss Dana White recently said that he was giving the Dagestani fighter all the time and space he needs to grieve.

But White has still indicated that he expects Khabib to face interim title holder Gaethje later this year, potentially in September at UFC 253 at an as-yet undetermined location.

“I’m sure Dana’s going time let everybody know when is Khabib going to fight,” Abdelaziz said.

“We have a blockbuster main event, him versus Justin Gaethje. Two of the best lightweights in the world today in the recent era.”

Both Khabib and Gaethje are managed by Abdelaziz, with the latter setting up his title shot by overpowering Tony Ferguson in a career-best performance at UFC 249 back in May.

“We see what Justin Gaethje did to his last opponent. He dismantled Tony Ferguson, he made him look an absolute amateur,” Abdelaziz added.

The manager said it was not his place to give definitive news on whether ‘The Eagle’ could be expected back in the octagon in September, but that talks were ongoing with White and the UFC matchmakers.

“Dana White should be the one delivering the news, it’s not my position to tell you, but everything is lovely, and you’ll see Khabib and Justin fighting before the year for sure,” Abdelaziz said.

“Everybody understands how close Khabib and his father were. Of course he’s heartbroken, it’s his father, it’s his mentor, it’s his best friend, but at the end of the day, Khabib’s father has a legacy he wanted Khabib to accomplish.

“We lost something very important and the UFC’s been so awesome, especially Dana. He’s been communicating with Khabib, the whole team has been amazing.”

Speaking on Fight Island in Abu Dhabi recently, White said he had been “leaving Khabib alone” and had not heard from him since his father’s death.

“I’m not messing with Khabib, I’m leaving him alone until he’s ready to talk. I’m letting him mourn and do what he has to do,” White told the media on Yas Island.

“I reached out to him the day of [his father’s death], and I haven’t heard back from him since.

“I don’t think it [a September fight with Gaethje] is off the table, I’m just waiting to hear from him [Khabib].” 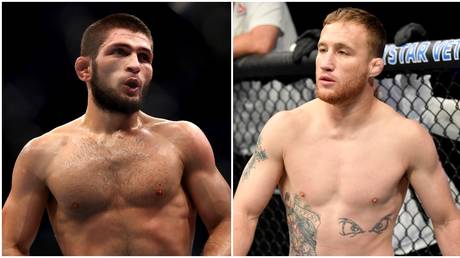