Kenyan middle distance runner Conseslus Kipruto, who took gold in the 3,000-meter steeplechase at the Rio Olympics, has been charged by authorities in relation to allegations of ‘defilement’ against a teenage girl.

Kipruto was released on bail on Monday after pleaading not guilty to the charges of having sexual intercourse with a 15-year-old girl – referred to as ‘defilement’ in Kenyan law.

Due to the age of the girl understood to be involved, Kipruto could be facing a maximum sentence of 20 years behind bars if convicted, according to the African country’s sexual offence laws.

Kipruto, 25, who is a policeman in addition to being an athlete, faced the charges in Kapsabet, a town in a high-altitude region which is well-known for the multiple distance runners it produces.

No arguments were made to support his defence in court, other than him stating that he denies that charges.

It was reported in Kenyan media that Kipruto is charged with having sex with the 15 year old on two dates in October of this year, and that the girl had gone missing from her home and stayed with Kipruto for three days. He was first arrested in connection with the charnges on Wednesday of last week.

Kipruto is considered among the finest middle-distance runners of his generation. In addition to his Olympic gold medal four years ago, he won world titles in 2017 and 2019 – but hasn’t competed in a race yet this year.

In September, Kipruto revealed that he had tested positive for the coronavirus. 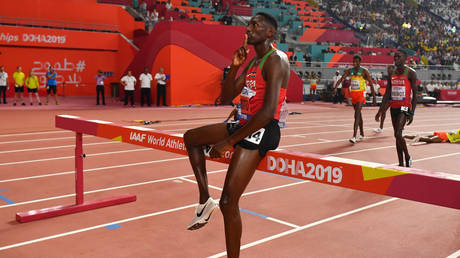 Fears for Christmas as Tier system...