Fresh from an explosive UFC debut, Mariya Agapova will reportedly get her wish for a showdown with America’s Shana ‘Danger’ Dobson when the Kazakh flyweight steps into the octagon for the second time.

Agapova, 23, announced herself to the UFC ranks in style when she submitted Hannah Cifers via rear-naked choke midway through their bout in Las Vegas earlier in June.

The former Invicta fighter and Dana White’s Contender Series combatant used her post-fight interview to call out Dobson, accusing her of dodging an octagon clash.

According to MMA Junkie, Agapova will now get her wish as the promotion has lined up a fight between the pair for its August 22 card at an as-yet unnamed location.

After winning her UFC debut in December of 2017, Dobson is on a three-fight skid, including losing her last octagon outing in February when she was defeated by Priscila Cachoeira via first-round KO.

That stands in stark contrast to American Top Team star Agapova, who is on a three-fight win streak, capped by her spectacular Performance of the Night bonus showing against Cifers.

Social media was abuzz after the event, hailing the tall and rangy Agapova as a “killer” and asserting that she had set the women’s 125lbs ranks firmly on alert. 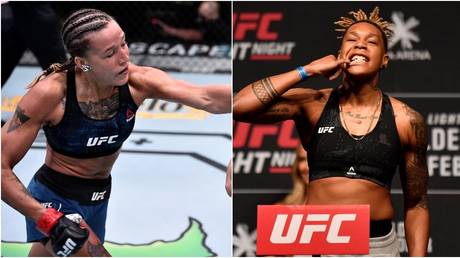