Roman Dik seemed to think he was cruising to victory as he walked down his opponent and dropped his hands to goad him. But Levan Makashvili had the perfect response as he landed a HUGE knockout punch to turn the tables.

The pair faced off at Russian MMA event ACA 109 in Poland as Czech fighter Dik looked to register an impressive win on his promotional debut.

Dik started well, and seemed full of confidence during the middle round of the fight as he pushed forward looking to find a home for his strikes.

And, after backing up Makashvili a couple of times, the Czech walked forward with his hands lowered and outstretched as if to goad his opponent into exchanging with him.

Makashvili responded, and gave Dik way more than he bargained for.

Makashvili, who already had notable wins over Hacran Dias, Sean Soriano and Jack McGann on his record, connected with a colossal left hook that knocked Dik out cold with just 22 seconds remaining in Round 2 of their lightweight bout.

It prompted screams of excitement from the ACA commentary team and was shared widely on social media as Dik’s arrogance was answered in the perfect manner by Makashvili’s big left hook.

It proved Mike Tyson’s age-old adage that, “Everybody has a plan until they get punched in the face,” and sent Dik to a humiliating knockout loss in his first appearance for ACA. 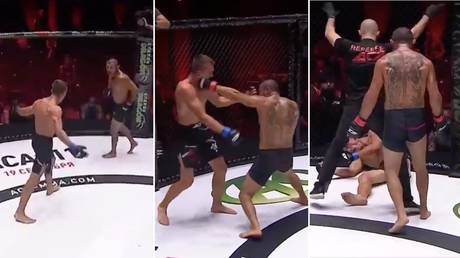