Misfiring England captain Harry Kane claims he is feeling “good” despite being brought off in both of his team’s games thus far at Euro 2020 and being branded the “worst player on the pitch” by some fans against Scotland.

England boss Gareth Southgate hooked Kane off after 74 minutes against the Scots at Wembley on Friday night following another underwhelming display from the Tottenham Hotspur man.

Kane, 27, has thus far failed to match the prolific form which saw him scoop the Golden Boot at the World Cup in Russia three years ago, and his subpar performances have left fans and pundits speculating as to whether Kane is fully fit or perhaps distracted by talk over his future following his declaration that he wants to quit Spurs this summer.

But Kane himself has now dismissed both those notions, also defending the right of Three Lions boss Southgate to substitute him.

“Gareth is within his rights to make the changes he thinks are best for the team,” Kane said, the Guardian reported.

“What we’ve learned over past tournaments is about trying to peak at the right time. The best time to be peaking is in the knockout stages and hopefully kick on from there.

“Maybe in Russia there were times, towards the quarter- and semi-final, when I wasn’t as sharp as I wanted to be. In the end we didn’t get to where we wanted to go, maybe partly for that reason.

“It’s about managing the squad, making sure everyone is feeling as fit and sharp as possible. In my case, it was a tough couple of games and it’s about making sure I’m right for the rest of them.

“I didn’t have any issues. I didn’t feel physically I wasn’t up to it. I felt going into those games as good as I’ve felt all season, if I’m honest.”

England’s draw against Scotland leaves them second in Group D – level on four points with the Czech Republic but behind on goal difference.

England host the Czechs at Wembley on Tuesday in the final round of group games, knowing that a win will see them top the group and a draw will also be enough to guarantee passage to the knockout stages.

Here’s how the Group D table looks after tonight’s draw with Scotland.

Next up: Czech Republic on Tuesday! pic.twitter.com/Pl3NgmU7TF

Kane’s form at the Euros thus far has surprised many considering that he ended the Premier League season as top scorer with 23 strikes and also top of the assist charts with 14 – making him the first player to achieve that particular double since Andy Cole in 1994.

But that feat wasn’t enough to help Spurs achieve significant success as they limped home in seventh in the league, before Kane went public with his desire to leave the club he has been at since he was a youngster.

Despite being linked with potential moves to the likes of Chelsea, Manchester City and Manchester United, Kane insisted that any transfer speculation was not the reason for his struggles at Euro 2020.

“Absolutely not,” Kane replied when asked about the issue.

“All my focus is on how I can help this team and how we can be successful in this tournament. I understand from a media point of view there is speculation but I am fully focused on the job here.”

The stats, however, point to a player who has been way off his best in the opening two games of this summer’s showpiece.

As highlighted by England icon Alan Shearer in The Athletic, Kane has had by the far the fewest touches of any England player to start both matches at Euro 2020.

Indeed, the only two centre-forwards playing at the Euros to have touched the ball less (after starting two matches) are Finland’s Teemu Pukki and Ante Rebic of Croatia.

Kane has managed just three shots in his two appearances, none of which has been on target. He’s also created just one chance.

Harry Kane is yet to register a shot on target during Euro 2020 😳 pic.twitter.com/TDTQgerWQW

So dire have Kane’s performances been, some fans labeled him “the worst player on the pitch” against Scotland while football writer Jonathan Liew wondered whether he was actually playing with his Golden Boot on.

However, others such as former England defender Jamie Carragher have spoken out to protect Kane, asserting that he is the victim of a lack of service.

Kane’s woes against Scotland were indicative of a broader England malaise – although the Spurs star claimed the game could serve as a wake-up call for the team.

“Sometimes a result like Scotland wakes you up a little bit – maybe opens your eyes to areas that we do need to improve,” Kane claimed. “It could be a good thing, what happened to us.”

England fans will certainly hope the result delivers a slap across the face for the team as they aim to navigate tougher tasks deeper into the tournament.

If they can’t, Kane and the team will be the ones going home, rather than football. 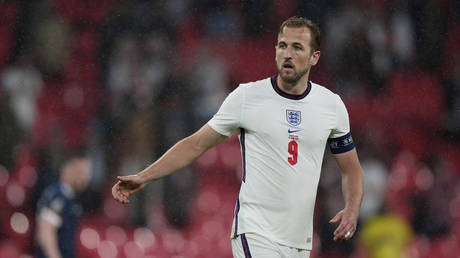 ‘More video replays than the match...