Arsenal fans including TV personality Piers Morgan have reacted with outrage after beloved mascot Gunnersaurus was let go by the club as part of cost-cutting measures on Monday.

The Athletic reported that Jerry Quy, who has played the role of Gunnersaurus for 27 years since the mascot was created in 1993, has been sacked by the club as they continue to streamline their operations as a result of the Covid-19 pandemic’s financial impact.

On August 5, Arsenal announced their intent to make 55 staff members redundant across several departments, although Quy is not included among that figure as he worked part-time.

Arsenal are said to have confirmed he will return to the role in the future, presumably when fans are allowed back into stadiums once again.

Quy, who had been a fan of the Gunners for 30 years before becoming Gunnersaurus, even skipped his own brother’s wedding in order to attend a home match.

Broadcaster and celebrity Arsenal fan Piers Morgan reacted with disbelief at the news, which quickly turned to anger as he started the #savegunnersaurus hashtag, while club legend Ian Wright expressed his sadness:

Gunners supporters were quick to express their own outrage at the news, demanding “justice for Gunnersaurus” and stating they “will never forgive this club.”

Another fan urged club owner Stan Kroenke to “rot in hell,” while another added: “It’s deadline day and the only breaking news at the club is Gunnersaurus being released, if you don’t laugh you will cry.”

I will never forgive this club for letting Gunnersaurus go. pic.twitter.com/tMWULzekSx

It’s deadline day and the only breaking news at the club is Gunnersaurus being released, if you don’t laugh you will cry

Even fans of London rivals West Ham United and Chelsea felt for Quy.

A tweet from Arsenal’s chief photographer Stuart MacFarlane on Saturday, in which he urged fans not to ask him about transfer news because he’s “pretty sure Gunnersaurus knows more than me,” seems all the more poignant now.

I wish people would stop wasting their time asking me to ‘announce’ ‘sign’ ‘tell Edu’ ‘tell Arteta’ ‘tell the board’ about new signings. I’ve said it on numerous occasions I’m just a photographer. Pretty sure Gunnersaurus knows more than me 🦖

With Quy no longer employed by the club, one Twitter user hilariously suggested Gunnersaurus start an OnlyFans page:

Get Gunnersaurus to start an OnlyFans.

Another chose to remember Gunnersaurus by one of his best highlights during his time at the club as he attempted a dizzy penalty watched on by former manager Arsene Wenger.

20 seconds of the greatest video to ever exist. ❤️ @Gunnersaurus pic.twitter.com/EP0quBoz6Z

The Gunners’ decision to let Quy and 55 other staff members go comes amid Mesut Ozil, who last played for them in March, earning £350,000 per week.

Since the announcement of their redundancy plans in August, Arsenal have also handed a three-year contract to Willian worth £220,000 per week and a deal of the same length to Pierre-Emerick Aubameyang worth £250,000 per week.

The club have also spent in excess of £30 million this summer to bring in the likes of Gabriel Magalhaes, Pablo Mari and Runar Alex Runarsson. 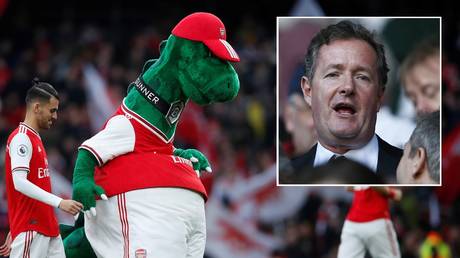