Nano Mesa, who plays football for Spanish club Cadiz, has been forced to publish a drugs test result to prove he was sober during a controversial interview which went viral.

Mesa was interviewed right after the club guaranteed its promotion to La Liga, causing a stir on social media with his behavior in front of the camera, which some deemed “strange” and “inappropriate.”

Cadiz returned to the top flight after a 14-year absence, having secured a six-point lead with two games remaining.

Mesa, who was visibly excited by the club’s achievement, gave an emotional interview which caused controversy and led fans to suspect he had taken prohibited substances.

To prove his innocence, the 25-year-old underwent a drug test to demonstrate that he was ‘clean’.

The player issued a statement on social media alongside a photo of his test, which confirmed he had not consumed any narcotic substances.

“In the last few hours, quite a stir has been created in relation to the video of the interview published by Cádiz CF TV,” he wrote.

“I feel obliged to step forward in the face of accusations that are untrue [and] cast doubt on my professionalism. This is why, with complete calmness and transparency, I have decided to carry out the appropriate test to demonstrate that the facts of which I am accused are totally false.” 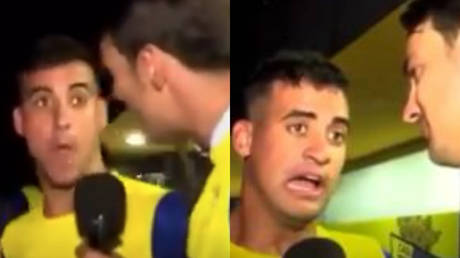