Superliga star Nicolai Geertsen hammered a superb scissor kick against the bar for Danish top-flight side Lyngby Boldklub – then went one better by volleying the rebound through a crowd of players while he was still on the floor.

Versatile Geertsen’s remarkable goal was caught on camera in Lyngby’s 9-0 cup rout against Slagelse, meeting a corner with a peach of a volley that slammed against the woodwork in the 70th minute.

As the shot rebounded back in his direction at speed, the 29-year-old adjusted his body on the turf to swing in another volley with his trailing leg from near the penalty spot, arrowing beyond the Slagelse goalkeeper’s dive and a defender on the line for an instant goal of the season contender.

The stunned stadium announcer initially awarded the goal to midfielder Marcel Romer, giving away their disbelief at the strike from a defender and leaving Geertsen rightfully claiming his magnificent goal.

How is that even possible?

“It’s completely insane,” he told bold.dk about the misidentification.

“Marcel has never been close to scoring such a goal, so I do not understand anything about that.

“It’s a bit of a random goal but it’s cool when something slightly different comes off. I try to play a little with experiments like this in training.

“I probably try something like this a couple of times a week, so people know it can happen once in a while.”

Lyngby won the Superliga in 1983 and 1992 and clearly have a good sense of humor, describing their key achievement in their Twitter profile as winning a Europa League qualfying round win in 2017 against Slovan Bratislava, who they note beat Barcelona in the 1969 European Cup Winners Cup Final.

Just give him the Puskas award now, it’s over, case closed. pic.twitter.com/IAqgGOaE05

The club’s official website, which said that Geertsen is sponsored by supporters, published the video of the goal and called it a contender for the FIFA Puskas Award, which recognizes the best goal of the year.

The honor has been handed to the likes of Liverpool forward Mohamed Salah, Paris striker Neymar and AC Milan talisman Zlatan Ibrahimovic, but is also known for nominating lesser-known players after uncapped Romanian Daniel Zsori beat Lionel Messi to the nod last year.

Reporter Mikkel Nohr described the amazement that greeted the strike. “The goal seems just as wild here the day after as it was live,” he said.

The technique, the quick reaction, the improvisation. Phenomenal tekkers

“Geertsen was very unimpressed that both various live scores and the stadium speaker thought that it was Marcel Romer who scored the goal.”

Geertsen said that the team had not planned the extraordinary move. “It was not rehearsed – not at all from a corner kick,” he explained.

“But the ball was there for me to try it, so of course I had a shot. It was cool to see it go in.

“It is, of course, one of my best goals. If I am being completely greedy, I would have liked to see it go in at first, but I will settle for this way.” 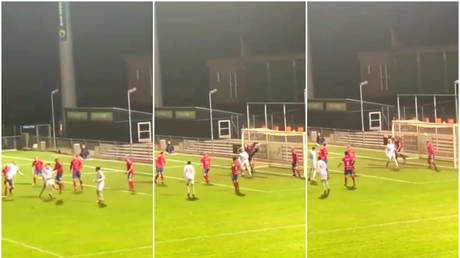