Jose Mourinho doesn’t like the feeling of ‘being in Big Brother’, but performances leave Spurs fans fearing dystopian future

Jose Mourinho doesn’t like the feeling of ‘being in Big Brother’, but performances leave Spurs fans fearing dystopian future

Being a fly on the wall in a Jose Mourinho dressing room would be among the most fascinating experiences imaginable for football fans – unless you are a Tottenham supporter increasingly dreading the direction the club is headed.

Fans will get an insight into how Mourinho operates on a daily basis when Amazon Prime drops its much-anticipated documentary ‘All or Nothing: Spurs’ later this year.

Even in the 20-second trailer which premiered on Friday, it was clear this had the potential to be gold: a club which had just sacked the inspiring Mauricio Pochettino, much to the shock of the players, paving the way for Mourinho to enter stage right.

A season unlike any other…#AllorNothingSpurs is NOT to be missed

Speaking about the series, Mourinho admitted he did not relish being under even more intense scrutiny than usual, but that viewers would enjoy the results.

“I try to forget them during the time, if you ask me if it’s something I enjoy, no,” Mourinho said ahead of Sunday’s North London derby against Arsenal.

“I don’t like the feeling of being in Big Brother but I try to forget them. I think I’ve managed to do that for the majority of the time.

“I have no idea what is there, I have no concerns. Nothing is fake, everything is real.

“I think for them it must be great for them because they have day by day, 24 hours of what football club and dressing room is. They have everything.

“It is not something I want to, also because I know better than anyone what our day by day is here but I think it will be very, very interesting for the people who love football and love sport.

“I think it will be really great for them.”

With a central protagonist as enigmatic, beguiling and intermittently explosive as Mourinho, it’s hard to see the series being anything other than pure theater.

But while Mourinho dislikes his current ‘Big Brother’ bubble, Spurs fans will be increasingly worried that they are headed towards a dystopian future of their own.

Their team put in another listless performance in the Premier League on Thursday night, drawing 0-0 with a rapidly-sinking Bournemouth team who had shipped 14 goals in their previous five games since the restart.

The stats were telling on a largely abject night for Spurs: they failed to have a single shot on target, while leading man Harry Kane had more touches in his own penalty area than he did in the opposition’s.

Mourinho was familiarly defiant, pointing with some justification to the fact that Kane could have had a penalty, but even that could not disguise another lethargic performance which leaves Spurs ninth in the table and scrapping for the Europa League places ahead of a visit on Sunday from Arsenal, who lie one place and one point above them in the standings.

Compounding the symbolism of his team’s struggles, Mourinho quit his press conference after the match early, citing a poor Zoom link with his media inquisitors.

Connectivity problems on the pitch and off it, some would say.

Any optimism which greeted Mourinho’s arrival in November when he replaced Pochettino has rapidly evaporated. It’s clear he does not have a magic wand for a quick fix to the failings that were increasingly evident under his predecessor. Spurs have major work to do if they are to lift themselves back into anything like title contenders again, not least with Liverpool and Manchester City so far ahead of the pack, and a far more auspicious mood at Chelsea, Leicester and a newly-revived Manchester United.

Tottenham fans may take pleasure in the fact that Arsenal are facing similar woes, but that is cold comfort for a team which went on such an exhilarating run to the Champions League final last season.

On paper, things may not seem so bad. The Champions League is out of reach for next season, but Spurs are only three points off a Europa League berth.

Since Mourinho took over, only Liverpool, Manchester City, Manchester United, Southampton and Wolves have taken more points in the league than Spurs.

The Portuguese will rightly point to mitigating circumstances in the form of a litany of injury blows – for example the loss of Kane and Son, in particular, just before the coronavirus-enforced break.

Mourinho himself has said it will take time, pointing to Jurgen Klopp’s success at Liverpool.

Recent form though indicates a club stagnating and playing an unendearing brand of football which leaves fans less likely to tolerate mixed results.

Spurs have won just two of their last eight in the league, and were dumped out of the Champions League in woefully meek fashion by RB Leipzig just before the coronavirus stopped play.

Tottenham have been displaying a distinct lack of invention, and Thursday’s showing at Bournemouth simply epitomized their recent struggles.

The money spent to lure Mourinho to North London (said to be around £15million-a-year) will mean he is undoubtedly given more time by chairman Daniel Levy to fix the malaise.

Fans with a glass-half-full mentality will point to Spurs’ magnificent new stadium, world-class training facilities, and the quality of players such as Kane and Son who they still have in their ranks.

They will also point to a manager in Mourinho who is a proven winner, and who so often thrives when his back is against the wall.

But Spurs fans of a more gloomy persuasion will look at recent performances and the financially-strained future that chairman Levy spelled out so ominously when the Covid-19 crisis hit. They may have spent serious money last summer – £100 million in all, including for record signing Tanguy Ndombele – but funds are likely to be far more limited in these post-Covid-19 times.

They will also point to the painful, ignominious end to Mourinho’s tenure as Manchester United manager, and to the critics who claim his safety-first brand of football is no longer fit for purpose in the high-intensity, attacking era inhabited by the likes of Klopp and Pep Guardiola.

Whichever way it goes for Mourinho Spurs, we will at least be able to watch part of it unfold first-hand – and it may make painful viewing for some. 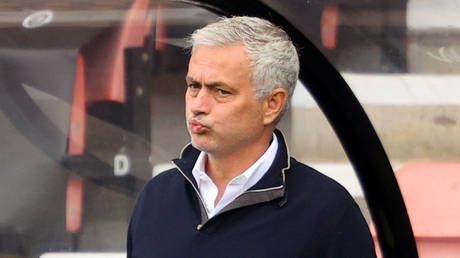