The blockbuster UFC 251 headliner between Kamaru Usman and Jorge Masvidal is one step closer after both fighters successfully hit championship weight on the eve of their much-hyped showdown on ‘Fight Island’ this weekend.

Both fighters stepped on the scales well in advance of the weigh-in window being closed to hit their 170lb marks for their hastily arranged (but hugely anticipated) fight in the Abu Dhabi heat.

Champion Usman was the first to hit the scales, doing so shortly after the weigh-in window was opened while wearing a face mask. A mask-less Masvidal followed about half an hour later, where he required a towel in order to remove his shorts to aid him hitting the welterweight title limit.

‘Gamebred’, the 2019 Fighter of the Year, made the weight despite accepting the fight on short notice after Gilbert Burns was removed from the original fight following a positive test for Covid-19.

The main event, along with every other fight on the card, is now subject to a final Covid-19 test before being officially approved. Each of the fighters taking part in the event taking place on a 10 square mile ‘bubble’ on Abu Dhabi’s Yas Island has been subjected to a series of coronavirus tests throughout fight week – with none having impacted the card thus far.

In addition to the main event, two further world title fights were also confirmed. Both Alexander Volkanovsi and Max Holloway successfully tipped the scales at 145lbs ahead of their featherweight championship rematch, while Petr Yan’s quest to become the UFC’s latest Russian champion is also one step closer after both he and Jose Aldo made weight for their bantamweight title clash. 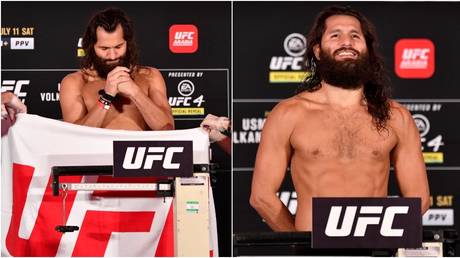 'Couldn't they have hire...