Close
Trending News
HomeSportJapanese Paralympics cops under fire after reportedly ‘getting drunk, brawling with locals and visiting a brothel’

Japanese Paralympics cops under fire after reportedly ‘getting drunk, brawling with locals and visiting a brothel’

Japanese Paralympics cops under fire after reportedly ‘getting drunk, brawling with locals and visiting a brothel’

Around 40 Japanese police officers dispatched to Tokyo to safeguard the Paralympics have been sent home after allegedly getting drunk, engaging in fights with locals and visiting a brothel, according to reports.

The officers were sent to the Japanese capital from the Yamanashi Prefecture to provide support to local police throughout the ongoing Games – but some of them seem to have done more harm than good after a number of the cops were said to have disobeyed a strict ‘no alcohol’ policy late on Saturday.

Despite Tokyo having numerous restrictions in place designed to mitigate the spread of Covid-19, several of the officers are reported to have left their accommodation and became involved in heated confrontations with members of the public.

Reports from Japanese media state that there were no serious injuries in the melee, which took place near to a train station in the Sumida district of the city, but police were called to the scene and later confirmed that they had detained some of their drunken colleagues.

The Asahi newspaper also reports that a number of the officers are understood to have visited a brothel in the city.

The entire 40-strong unit was subsequently relieved of their duties and sent back to the Yamanashi Prefecture on Monday.

Speaking to the UTY Yamanashi television station, Japanese police indicated that the reports are currently under investigation and that “measures” will be taken against any officer found to have engaged in inappropriate behavior.

Reacting to the news online, commenters suggested that the offending officers had brought shame to the city of Tokyo, which has been under the spotlight for much of the summer during the Olympics and Paralympics Games.

“It’s embarrassing that they got drunk, went out and made a fuss with members of the public,” one said, as noted by the Daily Mail.

“I know their job is sometimes stressful but it’s the same for everybody and they need to follow the rules as well,” said another.

“They have brought shame on their colleagues in Yamanashi. They should be ordered to retire from the force,” came the thoughts of a third. 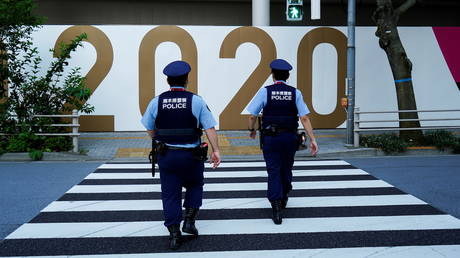