Officials in Japan have canceled all public viewing events in the capital Tokyo for its upcoming Olympic games, in a bid to reduce the risk of increasing coronavirus infections, it was announced on Saturday.

“We have decided to cancel these live viewing sites that gather people,” she said.

“On the other hand, we will make greater use of the web to create exciting atmospheres for the Games and to disseminate various [pieces of] cultural information.”

#BREAKING: Tokyo will cancel all public Olympics viewing events in an effort to reduce the risk of coronavirus infections, the city governor said Saturday. #Olympic#BreakingNews

Earmarked venues included the Yoyogi, Inokashira and Hibiya parks in the metropolis of 14 million people, which on Saturday reported 388 new coronavirus infections.

The meeting between Koike and Suga was the first in almost a month, and on Monday there will be an online meeting held by Olympics and Paralympics organizers to decide on how many spectators will be allowed at the Games, if at all.

Though foreign visitors will not be permitted in any fashion, Suga has facilitated the possibility of there being spectators by ending the capital’s state of emergency tomorrow.

Yet Japan’s top Covid-19 adviser, Shigeru Omi, continues to insist that fans should not be let in.

In a report published yesterday by Omi, the chair of the central government’s coronavirus subcommittee, as well as 25 other experts, it was concluded that banning all spectators remains the safest way to put on the Games, which should get underway on July 23 and have already been put back a year.

With just 6% of a 126 million population already receiving their jabs, Japan is attempting to accelerate its vaccination program.

And as they will no longer hold viewing events, Koike disclosed that the touted venues will now turn into vaccination centers.

This may come as a comfort to some, who were enraged when plans were revealed to vaccinate Japanese athletes before some members of the public.

Yet in the backdrop, widespread opposition to the games being held at all continues to grow, with numerous polls producing figures as high as 80% in support of cancelation or another postponement.

A fortnight ago, 10,000 volunteers resigned.

“I expect the organizing committee to take thorough anti-infection measures for volunteers,” commented Katsunobu Kato, the chief cabinet secretary, on the matter.

“And they need to respond carefully to volunteers as well as Japanese people in regards to concrete infection prevention measures.” 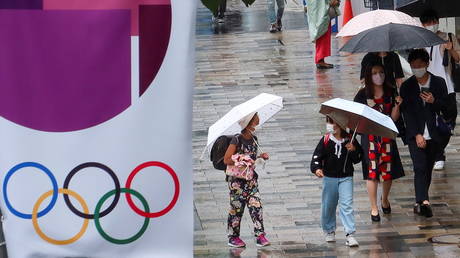