‘I’ve moved on’: Tyson Fury says he WILL NOT face Deontay Wilder trilogy fight in 2020, targeting UK bout in December

‘I’ve moved on’: Tyson Fury says he WILL NOT face Deontay Wilder trilogy fight in 2020, targeting UK bout in December

Tyson Fury has said he will no longer face Deontay Wilder for a third time in 2020 and is targeting a fight in the UK this December.

Fury wants to fight again this year but said the date became an issue for the American’s team.

“I was looking forward to smashing Wilder again. A quick and easy fight,” Fury told The Athletic. “But Wilder and his team were messing around with the date. They don’t really want to fight the lineal heavyweight champion. They know how it ends. The world knows how it will end: with Wilder on his ass again.”

Wilder had already pushed the fight back from July 18 to October 3 – as he said he had an injury –  and then asked to postpone it again.

“Then they asked me if I would agree to push it to December. I agreed to December 19. Then they tried to change the date again into next year. I’ve been training. I’m ready. When they tried moving off Dec. 19 and pushing to next year, enough was enough. I’ve moved on,” Fury added.

The Englishman’s last four fights, including both of his clashes with Wilder, took place in the United States.

The WBC and The Ring heavyweight champion wants to fight on home turf when he takes to the ring in December, though.

He is also hoping to take on compatriot Anthony Joshua, who holds the WBA, IBF, WBO, and IBO belts, in a unification fight by the end of next year.

Joshua won’t be available to face him this year, as he is expected to take on mandatory IBF challenger Kubrat Pulev in December.

After the pair have both fought before the end of 2020, Fury is determined to have his shot at the titles in a mouthwatering showdown.

“And before the end of 2021, I will be the only man on this earth with a heavyweight championship belt.”

Fury is said to have agreed financial terms for two fights with Joshua next year, and despite deciding against fighting Wilder again in 2020, he is still open to another rematch with him in the future after the American has won “a few fights” in the interim.

The pair first fought to a dramatic draw in 2018, in which the ‘Bronze Bomber’ twice knocked him down, but Fury – who beat the count on both occasions – was otherwise on top for much of the bout.

When they met again in February this year, it was a thoroughly one-sided affair with Fury taking the heavyweight titles thanks to a seventh-round knockout. 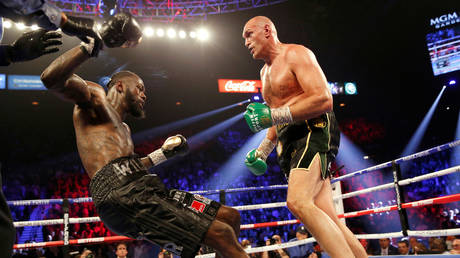