‘I’ve got MORE cars than this’: Floyd Mayweather gives a glimpse of BILLIONAIRE lifestyle on tour of INCREDIBLE LA mansion (VIDEO)

‘I’ve got MORE cars than this’: Floyd Mayweather gives a glimpse of BILLIONAIRE lifestyle on tour of INCREDIBLE LA mansion (VIDEO)

Boxing braggart Floyd Mayweather has once again lived up to his ‘Money’ nickname by giving fans a tour of a gleaming mansion he had built in Los Angeles, showing off a floor full of dazzling cars before calling himself “low key”.

More than 20,000 people watched live as Mayweather, dressed in a sleeveless multicolored top, faded jeans, white socks and white trainers, led the way through what he called his “Grand Theft Auto” garage, including pristine Rolls-Royces, Bentleys and Bugattis worth tens of millions of dollars.

As the camera panned, two beefy security guards could be seen making up Mayweather’s entourage while he strolled past more luxury cars to the front of a mansion.

“When I go to the west coast, as far as LA and Vegas, all my cars are black,” he explained. “Actually, I’ve got more cars than this – enough to fill a garage.

“I keep my cars in different places. I need to get my cars cleaned, they’re all dusty.”

Mayweather replied to a live message from celebrity car dealer Chop, who has also sold cars to sports stars including NBA legend Shaquille O’Neal and former heavyweight boxing champion Mike Tyson, as he remarkably claimed to be “low key” while revealing his vehicle of choice.

“This is my favorite car I drive right here,” he said, pointing out a Dodge Ram 1500 truck which sells for a relatively paltry top price of around $70,000.

“I’ve showed you some of the toys but the crazy thing about it all is, let me show you all the car I drive every day. I showed you guys a bunch of toys. See that right there? You can’t beat that.”

The unbeaten 43-year-old is part of a small group of superstars who can claim to be billionaires, including footballer Cristiano Ronaldo, golfer Tiger Woods and basketball icon Michael Jordan.

He joined their ranks after a lucrative boxing match which he won against UFC star Conor McGregor in August 2017, and he has since said that he wants to become a billionaire twice over through property investments.

“This house got built a few years ago,” he admitted, hinting that his tour had been motivated by his grounding during the current lockdown in the US. “I never moved in because I’m always traveling the world. I got houses all over America.”

Mayweather seemed to struggle to decide where to take the tour, alighting upon an all-marble kitchen with Versace champagne glasses, a shimmering indoor swimming pool, a giant outdoor fountain flanked by fire pits and a crammed closet inspired by luxury designer store Neiman Marcus.

“When you’re so rich you don’t know how your house works,” joked one fan as Mayweather appeared unfamiliar with some of the mansion’s features. “How do you even clean?” asked another fanciful suggestion.

“I’m not faking when I say I’ve got certain things,” said Mayweather, who was clearly keen to impress before ending at an on-site vineyard when he claimed to grow grapes. “It’s not bragging or boasting, I live a certain lifestyle.”

“I ain’t doing nothing, just taking one day at a time. You can never take anything for granted. I’m truly blessed beyond belief.”

Mayweather denied rumors that he was facing financial problems earlier this year, insisting that he was making “seven figures a month” from “smart investments” while dismissing persistent talk of a return to the ring.

The undefeated 50-fight great had not fought for almost two years before his 10th-round stoppage of McGregor in his last fight. 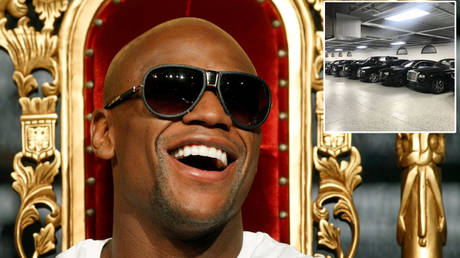