Close
Trending News
HomeSport‘I’ve got a special recipe with a lot of secret sauce’: Jorge Masvidal says he has the ingredients needed to beat Usman at UFC 251

‘I’ve got a special recipe with a lot of secret sauce’: Jorge Masvidal says he has the ingredients needed to beat Usman at UFC 251

‘I’ve got a special recipe with a lot of secret sauce’: Jorge Masvidal says he has the ingredients needed to beat Usman at UFC 251

In the event that his three piece and a soda isn’t enough to get the job done at UFC 251, Jorge Masvidal says he has arranged for a very special recipe to dethrone welterweight champion Kamaru Usman on ‘Fight Island’.

While he admits the journey to this point was tough – after all, who enjoys cutting 20lbs while travelling halfway around the world? – now that the moment has arrived, Masvidal says that the hard work has been done. This is where the fun starts.

“20-pounds in six days. That’s all I’m going to say. It was rough, but I did it. I get shit done,” ‘Gamebred’ told the assembled media in Abu Dhabi.

“The opponent in front of me is very tameable so I never thought about it like that. I’m hurting though, initially during the weight cut but now it’s all behind me. I made the weight. I already got liquids in me, food in me. Pretty soon it’ll be party time, you know?”

A win in the biggest fight of his life would cap one of the more unique career resurgences in recent UFC history. The perspective of Masvidal was, for some at least, that of a truly talented fighter, but not someone who necessarily belongs in the main event. But then something changed – ‘The Resurrection’, as he puts it.

An underdog win against Darren Till was followed by the now infamous 5-second shellacking of Ben Askren. By the time he raised the ‘BMF’ title aloft in Madison Square Garden last November, it was confirmation that the former street fighter had ascended to the summit of his sport.

It only took him 48 fights.

“It would mean a lot, it would definitely mean a lot,” he said about the prospect of claiming his first major world title at this juncture of his career. “It would put another stamp on my career, another achievement, another mark. But also the way in which you do it, you know? I’ve got a lot of plans in my head. I’ve got a special recipe how I’m going to get this done, with a lot of secret sauce.”

According to a giddy Dana White on Friday, the Usman-Masvidal showdown is trending similarly to the promotion’s most successful fight in history – Khabib Nurmagomedov vs. Conor McGregor – and to think that it took the Covid-19 diagnosis for the man in Masvidal’s position this time last week, Gilbert Burns, to get to here is almost alarming with the benefit of hindsight.

“They came correct and that’s why I’m here,” he added when asked about the protracted contract discussions with the UFC which threatened to derail the bout.

“That’s the only thing I can tell young fighters coming up: know your value. A lot of the young guys don’t know their value, and that’s not their fault. I didn’t know my value when I was 19, 20 years old. If someone offered me $2,000 I’d kill a gorilla.

“We learned a lot from the Nate Diaz contract and payout. We learned a lot about negotiations on this one as well. Before, after, during — all the games that were being played. Why did it have to come at six days notice, 20-pounds to go, travel across the world to get the numbers that I wanted?

“In that sense… I’m not going to say I’m thrilled but I’m still happy and the numbers were made. It just makes for a better story 20 years from now, I guess.” 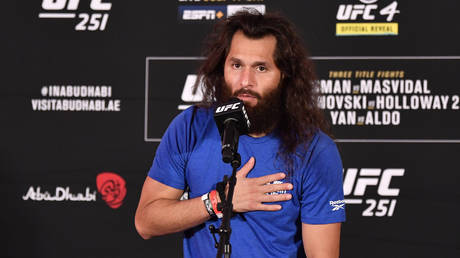