Former two-division UFC champion Georges St-Pierre has opened the door to a potential dream comeback fight with the undefeated Khabib Nurmagomedov, saying that he would only return to the Octagon to face ‘the biggest fish’.

St-Pierre, 39, hasn’t competed in the cage since he claimed the UFC middleweight title from Michael Bisping in New York in late 2017. He relinquished the title and announced his retirement soon after, reportedly after talks aimed at securing a fight with Nurmagomedov hit a brick wall.

Since then, St-Pierre has stoked the flames of a potential matchup with Khabib on several occasions but these were reportedly rebuffed by UFC president Dana White who was concerned that St-Pierre may defeat Nurmagomedov for his UFC lightweight title – and promptly step away from the sport once more.

Nurmagomedov has also made clear his desire to fight St-Pierre with the Russian’s vocal stance on the issue reportedly softening White’s stance on the issue, and speaking with ESPN this week St-Pierre affirmed once and for all that he does want to test himself against the Khabib – even if he thinks that the Russian might be “unbeatable“.

“If I come back, it would be for one fight,” St-Pierre said. “And I need to take, for me, the biggest fish. And the top guy right now, the name is Khabib.

“As a fighter, the most exciting thing is to take the guy who seems invincible, unbeatable. He has the aura of invincibility. But it’s also the scariest thing to do.”

While Khabib very much has his hands full ahead of his October 24 tussle with Justin Gaethje in Abu Dhabi, White has hinted that he has “something special” in mind for him should he get past the challenge of the hard-hitting American – and even though he is keeping his cards close to his chest as to what that means, one potential possibility certainly seems to be a fight with the former longtime welterweight champion St-Pierre.

Another potential option for Khabib was revealed by White last week after he announced that he believed he was close to arranging for both Nurmagomedov and Conor McGregor to be competing coaches on a rebooted series of “The Ultimate Fighter” – an incendiary combination which would likely prove to be a ratings bonanza for the organization and its broadcast partners.

However, White said that Khabib has gone cold on the idea after initially being close to an agreement after he disputed a series of tweets issued by the Irishman.

Should Khabib be successful against Gaethje at UFC 254, that would raise his career ledger to an incredible 29-0. He was previously stated that he wants to retire once he hits a 30-0 record – something which might lead to White forgoing a traditional contender in favor of a lucrative, so-called ‘money fight’ with another big name.

And when it comes to mixed martial arts, there aren’t many bigger names than that of Georges St-Pierre. 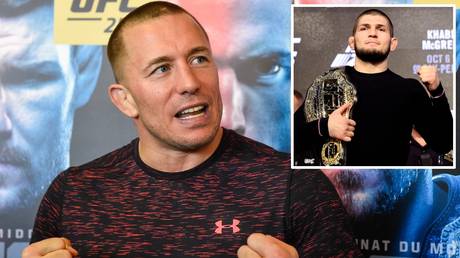 How to completely hide photos on y...