George Preston Marshall, the last NFL owner to accept the integration of black players into the league, is to have his name removed from Washington Redskins “Ring of Fame” and website, the team has announced.

Marshall, who died more than fifty years ago, was a noted segregationist didn’t agree to the addition of black players on the Redskins roster until he was “forced to do so” in 1962.

That move came an entire decade after the rest of the teams in the NFL had moved with the times – a fact which, given the current climate in US professional sports, has led to calls for the team to strike Marshall from all historic ties with the team.

Last week, the Redskins renamed the section of their FedEx Field stadium which bore Marshall’s name after their late Hall of Fame player Bobby Mitchell, the team’s first black player.

Marshall’s granddaughter, Jordan Wright, told the Washington Post that she wasn’t the least bit concerned with the decision to take down the statue bearing the likeness of her grandfather.

“No, not at all — not one damn bit,” Wright said, when asked if her family objected to the move.

Crews are presently removing the rest of the George Preston Marshall memorial at RFK pic.twitter.com/5W9919SMDu

I’m not gonna call them the “Washington football team” still gonna say Redskins until the name is changed. But I now support a name change. With the removal of George Preston Marshall from Redskins history, the time is now to distance the organization from its racist past.

as a #Redskins fan, i hope they change their name. removing the founder of the team George Preston Marshall from the ring of fame and removing his statute was a great start. he was a complete racist. but the name needs to be addressed next

Marshall owned the Washington franchise from its inception in 1932. The team was originally based in Boston before the franchise moved cities several years later. Objection to the “Redskins” nickname grew in the 1960s, with Native American groups stating that it was a pejorative term towards their ethnicity.

The team has resisted several calls to rename the side in recent years. Current owner Dan Snyder said in 2013 that he would never contemplate renaming the famous franchise.

However, the recent debate regarding race in the United States has once again raised calls for the team to address the nature of its nickname but so far the team, and the NFL, have resisted significant comment on the matter. 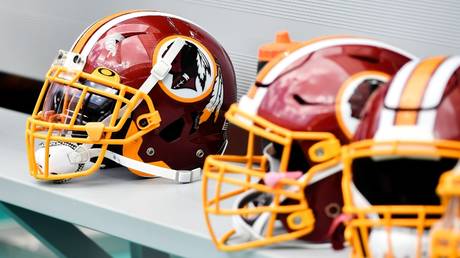