Close
Trending News
HomeSportIt’s ON! Jorge Masvidal has AGREED a deal with UFC and will face Kamaru Usman at UFC 251 – reports

It’s ON! Jorge Masvidal has AGREED a deal with UFC and will face Kamaru Usman at UFC 251 – reports

It’s ON! Jorge Masvidal has AGREED a deal with UFC and will face Kamaru Usman at UFC 251 – reports

A titanic replacement bout has reportedly been agreed for UFC 251 next weekend, with Jorge Masvidal set to step in to face champion Kamaru Usman for the UFC welterweight title.

BMF champion Masvidal was the natural No. 1 contender to face Usman for the UFC’s 170-pound title, but appeared to have priced himself out of the matchup when the UFC dropped talks with the Miami native and instead booked Usman to fight Brazilian contender – and cheaper option – Gilbert Burns in the “Fight Island” headliner.

But those plans hit the buffers before Usman and Burns even left the States, with the news that Burns had failed his pre-travel COVID-19 test – the first precautionary step in a battery of tests fighters and staffers are required to undergo before fight night on Yas Island, Abu Dhabi.

It left Usman still in the States, and without an opponent, just one week before fight night. But the UFC has since scrambled and, after former interim champion Colby Covington and BMF champ Masvidal both expressed their willingness to step in, the UFC appears to have struck a deal with the latter.

ESPN’s MMA reporter Ariel Helwani has confirmed that the pair have both agreed to the fight, and are headed to Las Vegas where, if their respective COVID tests are negative, they will board a flight to Abu Dhabi, where they will enter a 48-hour quarantine before undergoing their usual fight week obligations.

“Negotiations for Usman vs. Masvidal are done, per sources,” Helwani posted to Instagram.

“All sides agreed to terms. Usman is en route to LV; Masvidal landed earlier via private jet. Once at the hotel, they’ll have to take a COVID test and then quarantine while awaiting results. If negative, they’ll fly to AD likely tomorrow.

“Negotiations were obviously a huge hurdle but now that is clear. Now it depends on that COVID test, which is obviously a massive hurdle, too. Total crap shoot. If (hopefully not) they don’t pass the COVID test the fight can’t and won’t happen.”

Currently, the UFC has not confirmed the booking, and the promotion is unlikely to do so until they have at least one set of negative COVID tests confirmed for each fighter.

But the potential signing of the best welterweight title fight the UFC could book will raise fans’ expectations ahead of the UFC’s first-ever “Fight Island” show.

Reigning UFC featherweight champion Alexander Volkanovski will put his belt on the line for the first time against former champion Max Holloway in a rematch of their clash at UFC 245 last December.

And on the same card Russia’s Petr Yan will take on former UFC featherweight champion Jose Aldo for the vacant UFC bantamweight title. 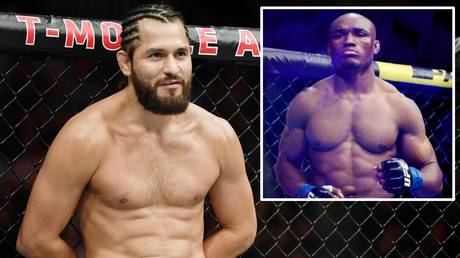